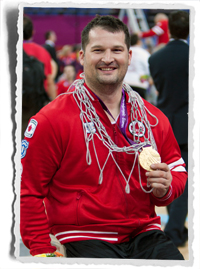 (Winnipeg, Man.) Former Team Canada power forward Joey Johnson is among the 2013 class of inductees into the Manitoba Basketball Hall of Fame. He is the first Paralympic athlete to be inducted into the hall of fame.

Johnson was a force for the Canadian men’s wheelchair basketball team from 1995-2012. Over the course of his career, the native of Lorette, Man. competed at five Paralympic Games, capturing three gold medals and one silver. He also won a world championship title in 2006.

In addition to his exploits with Team Canada, he has played the sport professionally in both Australia and Germany, where he became a household name as he captained the RSV-Lahn Dill club team to multiple European championships.

The Class of 2013 will be inducted into the Manitoba Basketball Hall of Fame at a formal ceremony on October 5, 2013 in Winnipeg. The inductees and their respective categories are as follows: