Five-time Paralympian and two-time Paralympic gold medallist Roy Henderson and longtime official Trevor Kerr were both inducted into the Wheelchair Basketball Canada Hall of Fame in recognition of their outstanding achievements on and off the court within the wheelchair basketball community.

The nominees for all of the award categories align with the values of Wheelchair Basketball Canada. The individuals exemplify fair play and sportsmanship while committing to values of inclusion. They are leaders in their communities, positive role models, and they display superior performance in their respective disciplines. These awards are the membership’s opportunity to nominate and recognize individuals for their contributions within their respective communities.

Nik Goncin enjoyed a breakout year in 2013, becoming a force to be reckoned with on the basketball court as he represented Team Canada as a member of both the Junior and Senior Men’s National Teams.

In his second stint with the junior team, Nik helped Canada claim top spot at the America’s Zone qualification tournament in Mexico and secure a berth to the junior world championship. His performance at the 2013 Men’s U23 World Championship did not disappoint, as he led Canada in scoring in seven of the team’s eight games and was ultimately named the tournament’s most valuable player.

A rookie with the senior team, Nik also gained valuable experience at the Americas Cup in Colombia and the Kitakyushu Champions Cup in Japan.

In 2013, Nik was also named to CIBC Team Next and is one of only two wheelchair basketball athletes in Canada selected to the legacy program.

The future is very bright for this young star and it is fitting that he be recognized for his accomplishments this past year. Congratulations to Nik Goncin, the 2014 Junior Athlete of the Year. 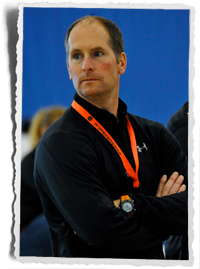 Darrell Nordell, this year’s Leadership Excellence Award recipient, is an outstanding leader whose tireless efforts impact multiple tiers of the wheelchair basketball system in Canada. Darrell is a passionate volunteer and is heavily involved with the sport at the club, provincial and national team levels. He is committed to not only advancing the sport as a whole, but also to helping others grow and succeed on and off the court.

As a coach, Darrell instils a positive culture that resonates with athletes and colleagues alike within each of the programs he helps foster. As a program coordinator, he leads by example and always brings honesty, respect and integrity to his role. As the commissioner of the open division of the Canadian Wheelchair Basketball League (CWBL), he dedicates countless hours to reviewing and analyzing the game with the ultimate goal of improving the competitive experience for club teams across the country.

A true advocate for the sport, Darrell continues to contribute in so many ways to the wheelchair basketball community in Alberta and across Canada. As such, we extend our congratulations and many thanks to Darrell Nordell, winner of the 2014 Leadership Excellence Award. 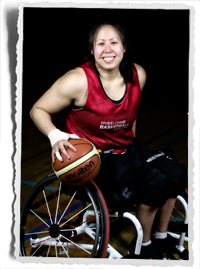 Amanda Yan is relatively new to wheelchair basketball and yet she embodies precisely what it means to be a True Sport athlete.

With a firm commitment to the sport, Amanda made her debut with the Senior Women’s National Team in 2013 and proved herself as a fierce competitor with an incomparable work ethic. Known on the court as being an extremely coachable athlete, she has gained the respect of her teammates, coaches, officials and opponents. Training hard, playing fair, and respecting others are all attributes that define Amanda on and off the basketball court.

As further confirmation of her status as a star on the rise, Amanda was one of 67 athletes chosen from across Canada to represent CIBC Team Next, an initiative designed to support the next generation of elite Canadian amateur athletes as they strive for the podium.

A role model, Amanda also dedicates time to give back to the community in British Columbia. Whether she is speaking at schools or assisting in the Let’s Play program, she empowers youth to stay healthy and have fun through sport.

We extend our congratulations to Amanda Yan, a worthy recipient of the True Sport Award. 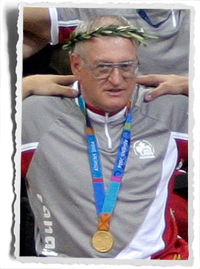 Roy Henderson has left an indelible mark on the wheelchair basketball community both in Canada and around the world.

Roy started playing the sport in the early 1980’s. He went on to represent Canada at the 1988 Paralympic Games, which marked the first of five consecutive Paralympic appearances for the native of Peterborough, Ontario. A two-time Paralympic gold medalist, Roy competed at the Games in 1988, 1992, 1996, 2000, and 2004. He is also a four-time bronze medalist at the Gold Cup World Championships, having donned the red and white jersey in 1990, 1994, 1998, and 2002.

Domestically, Roy won 10 gold medals, seven silver medals and one bronze medal with Team Ontario at the National Wheelchair Basketball Championships between 1987 and 2004. He was selected to the national championship all-star team five times.

Over the course of his career, Roy was renowned for his diligent work ethic. A veteran leader and proud Canadian, he always took it upon himself to help guide the young rookies in their development.

In 2005, Roy received the Stan Stronge Memorial Award as an athlete who exhibits fair play and a dedication to excellence. He was inducted into the Peterborough & District Sports Hall of Fame in 2006.

With his induction into the Wheelchair Basketball Canada Hall of Fame, Roy formally joins the ranks of Canada’s greatest wheelchair basketball athletes. Congratulations Roy Henderson and welcome to the Hall of Fame. 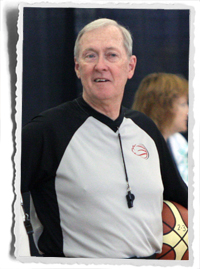 A longstanding and widely respected official both within Canada and abroad, Trevor Kerr has been a fixture on the wheelchair basketball scene for more than three decades.

Trevor became a wheelchair basketball official in 1979 and went on to establish himself as one of the most experienced referees in Canada. With his wealth of technical expertise, he became a licensed official with the International Wheelchair Basketball Federation in 1995. He has since represented Canada at various competitions both as a referee and as a commissioner, including the Paralympic Games in Beijing in 2008.

In 2007, Trevor was recognized as the first Official of the Year at the inaugural Wheelchair Basketball Canada awards ceremony.

Trevor’s legacy within the sport of wheelchair basketball extends far beyond his career as a referee. In addition to his significant impact as an official on the court, Trevor has also been actively involved in the development of the sport behind the scenes.

He has been a member of the Wheelchair Basketball Canada board of directors as vice-president of the technical portfolio since 1999. In that role he has worked to improve technical aspects of the game and help shape the future of the sport. A true mentor, he has also dedicated an immense amount of time to the development of fellow officials in Canada by facilitating introductory educational courses and serving as an evaluator at various domestic events.

In recognition of his outstanding accomplishments, join us in congratulating Trevor Kerr as we welcome him to the Wheelchair Basketball Canada Hall of Fame.