The Canadian Senior Women’s National Team that captured the gold medal on home soil at the world championship in 2014 was also inducted into the Wheelchair Basketball Canada Hall of Fame last week.

The 2015 Wheelchair Basketball Canada award winners are as follows: 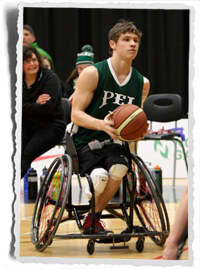 At the age of 16 years old, he became one of the youngest players ever to earn a roster spot on the Canadian Senior Men’s National Team. His game-breaking talent was on full display at the 2015 Canada Winter Games, where he helped an underdog Prince Edward Island team to a best-ever fourth place finish.

As a leader with the Canadian Senior Women’s National Team, she played a pivotal role in Team Canada’s successful quest to capture the gold medal on home soil at the 2014 Women’s World Wheelchair Basketball Championship in Toronto. McLachlan earned a tournament all-star award after she led all players at the world championship in rebounding, while finishing second in overall scoring and third in average points per game.

David Eng is a natural leader whose dedication to his sport rivals that of any elite athlete. As a respected co-captain of the Canadian senior men’s national team, David leads by example both on and off the basketball court. He is actively involved in raising awareness for the sport and the greater Paralympic movement. 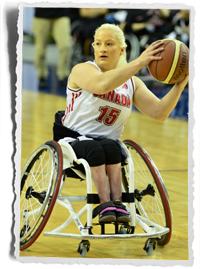 Rising star Melanie Hawtin excels on the hardcourt with a combination of fair play, respect and a competitive spirit that are at the very core of the True Sport movement. A dedicated athlete, she plays the game with passion and poise. She is a role model and gives back by graciously volunteering her time at community outreach initiatives as an ambassador for the sport.

Paralympic gold medallist Sabrina Durepos has embraced the role of a coach and mentor who focuses on giving back to the sport by empowering the next generation of athletes. She is a great communicator who has the ability to instill confidence in others. She has become the driving force behind the junior development program in New Brunswick and was at the helm of the team that placed sixth at the 2015 Canada Games.

The Canadian Senior Women’s National Team accomplished the once-in-a-lifetime feat of winning a gold medal on home soil at the 2014 Women’s World Wheelchair Basketball Championship in Toronto. Not only did Team Canada greatly improve upon its sixth place finish at the London 2012 Paralympic Games, but it also bested the reigning Paralympic gold, silver and bronze medalists on its way to the top of the podium. With the win, Canada captured its fifth gold medal in team history and seventh consecutive podium finish at the world championship.

The members of the 2014 Canadian Women’s World Championship Team were as follows: