The award winners were announced at a banquet in Vancouver, B.C. on Saturday following the CWSA annual general meeting. The awards recognize the best and brightest of the wheelchair sports community in Canada.

2014 Doug Grant Memorial Award for Team of the Year:
This past June, the Canadian Senior Women’s National Wheelchair Basketball Team accomplished the once-in-a-lifetime feat of winning a gold medal on home soil at the 2014 IWBF Women’s World Championship in Toronto, Ont. Not only did Team Canada greatly improve upon its sixth place finish at the London 2012 Paralympic Games, but it also bested the reigning Paralympic gold, silver and bronze medallists on its way to the top of the podium.

2014 CWSA Female Athlete of the Year: 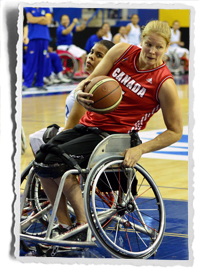 Vancouver, B.C. native Janet McLachlan is arguably the best female wheelchair basketball player in the world. This June, she proved it by leading Team Canada to a gold medal at the 2014 IWBF Women’s World Championship. McLachlan led Team Canada in minutes played (more than 36 minutes per game), had a double-double in points and rebounds in all games, averaged 21.5 points per game and collected 133 rebounds (40 mor

e than her next closest competitor). She also sunk the game-winning shot in the semifinals against the Netherlands while being double-teamed with 0.9 seconds on the clock. For her performance, McLachlan was named to the world championship all-star team. In 2014, she also steered the BC Breakers to a gold medal performance with a game-high 33 points in the final game at the Canadian Wheelchair Basketball League (CWBL) Women’s National Championship and was named the most valuable player of the tournament.

2014 Stephan Dubuc Memorial Award for Coach of the Year: 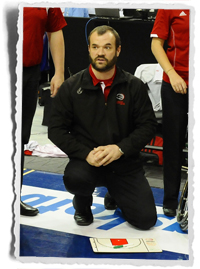 In June 2014, Bill Johnson of Winnipeg, Man. led the underdog Canadian team to a gold medal on home soil at the IWBF Women’s World Wheelchair Basketball Championship in Toronto, Ont. Canada went 4-1 through preliminary round play and went on to defeat reigning Paralympic silver medallist Australia 63-47 in the quarter-finals, reigning Paralympic bronze medallist the Netherlands 75-74 in the semifinals, and reigning Paralympic champion Germany 54-50 in the finals. The triumph marked the fifth world championship title for the Canadian women and was a significant improvement from the disappointing sixth place finish at the London 2012 Paralympic Games.

2014 Stan Stronge Memorial Award for Fair Play and Dedication to Excellence: Elmira, Ont. native Katie Harnock was crucial to Team Canada’s gold medal victory at the 2014 IWBF Women’s World Wheelchair Basketball Championship. Both on and off the court, she displayed the skill, composure and leadership of a veteran player and was a strong mentor to her younger teammates. During the world championship, Harnock averaged 15.8 points and more than 34 minutes per game, earning herself an all-star award. She was also named by her teammates as the recipient of the True Sport Award, which rewards an athlete who engages in healthy, fair, inclusive and fun sport.

2014 Rick Hansen Award for Outstanding Contribution to the Development of Wheelchair Sport in Canada: 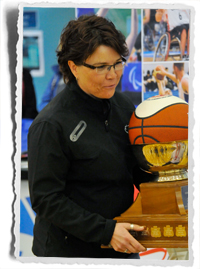 2014 CWSA Barb Montemurro Award: Kathy Newman has long been known as one of the brightest lights in the Canadian parasport system. Since retiring as executive director of BC Wheelchair Sports Association, however, she has escalated her volunteer involvement. This year, she was a key force on the Wheelchair Basketball Canada and CWSA board of directors, served as the sport chair for wheelchair rugby with the 2015 Parapan Am Games and was also an important member of the organizing committee for the 2014 Women’s World Wheelchair Basketball Championship.

2014 Dr. Robert W. Jackson Memorial Award for Outstanding Volunteer Service: For over 30 years, Pat Harris has been an active athlete, coach, mentor and administrator. Along with his wife Nancy, he has fought for the rights of people with disabilities using sport as a vehicle for social change. While Harris is a long-time board member for the BC Wheelchair Sports Association and a coach of several Canada Games and Canadian Wheelchair Basketball League teams, his biggest impact has been felt in Northern BC. Pat has worked tirelessly to improve the lives of people with disabilities living in the north by founding and coaching the Prince George Titans wheelchair basketball team, conducting wheelchair basketball demonstrations, recruiting wheelchair basketball players (including mentoring Paralympians Bo Hedges and Elisha Williams), and developing several accessibility councils and initiatives, including Measuring Up the North.