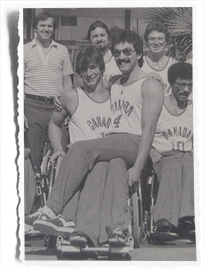 Throughout his career, Colistro represented Canada at three Paralympic Games (1976, 1980, 1984) and two world championships (1979, 1986), helping the team secure silver in 1986. He is also a two-time Paralympic medallist in wheelchair athletics.

A force to be reckoned with on the Canadian courts, Colistro played for the Vancouver Cable Cars from 1971-1986. The Cable Cars were one of the most dominant provincial clubs in Canadian wheelchair basketball history and Colistro was a part of the team that won six straight national championship titles.

The 2016 Basketball BC Hall of Fame inductees #coaches #builders #athletes #heroes #teams #mentors thanks to @dlrphoto.ca 🏀🏀