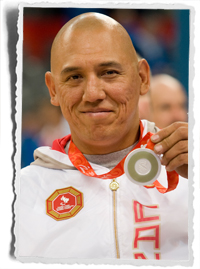 Peter is a three-time Parlympic medallist who will represent Canada in his fifth Paralympic Games this summer in London. He helped Canada capture back-to-back gold medals in Sydney in 2000 and Athens in 2004, before taking home silver in Beijing in 2008. That same year (2008) he was honoured twice as Wheelchair Basketball Canada’s and the Canadian Wheelchair Sports Association’s male athlete of the year.

“It’s a great honour to be recognized by many of your peers and to be invited with the rest of the nominees. Looking at the list of highly decorated people who have done a lot for their communities I feel very humbled being included,” he told the Vancouver Sun in a recent interview.

“Each and every one of our Award recipients is a leader and role model who has made a profound impact on communities across Canada and worldwide,” said Roberta Jamieson, President and CEO of the National Aboriginal Achievement Foundation. “By honouring their achievement we continue to inspire many others waiting to demonstrate their potential…”

The National Aboriginal Achievement Awards is celebrating its 19th year and will be hosted by hockey legend Theoren Fleury and actress Carmen Moore. Rock singer Robbie Robertson will also make an appearance.

A 90-minute version of the NAAA is produced and broadcast nationally by two select television networks, Global Television and Aboriginal Peoples Television (APTN).

About the National Aboriginal Achievement

The National Aboriginal Achievement Awards (NAAA) were established to encourage and celebrate excellence in the Aboriginal community.  NAAF created the Awards in 1993, in conjunction with the United Nation’s International Decade of the World’s Indigenous Peoples.  The Awards recognize the outstanding career achievements of First Nations, Inuit and Métis people, in diverse occupations.  Now entering their eighteenth year, these Awards have become a Canadian institution.

The Senior Mens National Team is amongst the top wheelchair basketball teams in the world. The Canadian Men are the defending silver medallists from the 2008 Beijing Paralympic Games. They won back-to-back Paralympic gold medals in 2000 and 2004 and have reached the podium at five of the last six consecutive World Championships.