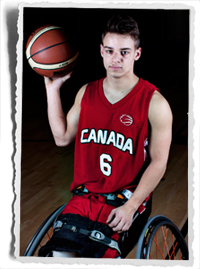 (Kitakyushu, Japan) The Canadian Men’s Wheelchair Basketball Team won the silver medal at the 2013 Kitakyushu Champions Cup following a 68-47 loss to rival Australia in the championship game on Sunday.

The rematch of the London 2012 Paralympic Games final proved to be a very physical contest. Canada came out strong against the Aussies to seize the early edge, 17-14, after the opening quarter. Australia responded in the second frame by going on a run to eclipse the Canadian lead and take a 29-25 advantage into halftime. The trend continued in the latter half of the match and Canada opted to get all of its players into the game.

Canada went undefeated with a 3-0 record in the preliminary round of the tournament, including a pair of single-point victories over Australia (53-52) and Japan (62-61). Canada also defeated Korea by a score of 68-49.

The Kitakyushu Champions Cup was the final tournament of 2013 for Team Canada.