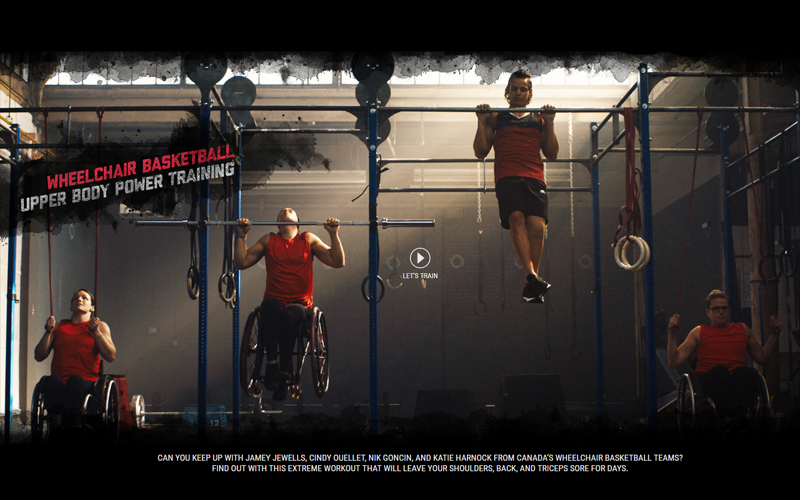 The campaign lets fans experience firsthand the intense and grueling training done by some of Canada’s toughest Paralympic athletes. The ParaTough Training Series, now available online at ParaTough.com, features 14 Rio-bound Paralympians showcasing five authentic, challenging workouts that they do regularly in order to compete at the elite level – and fans are invited to follow along and try to keep up.

Wheelchair basketball star Cindy Ouellet, for example, showcases her tremendous upper body strength by pounding out one-arm chin ups while in her wheelchair, using it as an extra 20-pound weight.

“Doing this series was a fantastic opportunity to show Canadians how hard our team has been training for Rio,” said Ouellet. “I invite all Canadians to try the workouts themselves, and to take the #ParaToughChallenge by trying one of the exercises, posting it on social media, and then challenging your toughest friends to tackle it themselves.”

“The amazing thing about these videos is they show the hard work that happens off the field of play,” said Martin Richard, Executive Director, Marketing and Communications for the Canadian Paralympic Committee. “Sometimes when you see athletes competing on the field of play, they are so accomplished that they make it look easy. These training videos are anything but easy. Canadians can now see the behind the scenes training and incredible dedication that goes in to becoming a champion.”

The campaign launches today and will be featured on TV, radio, print, digital and a dedicated website, ParaTough.com, where the workout videos are housed (available to users at no cost) and where users can get to know the athletes behind the training series.

BBDO Canada worked very closely with Paralympic athletes, coaches and trainers in each of the five sports to select the featured workouts.

“It was extremely important to us that the featured workouts be completely authentic to the athletes’ actual training regimens for their respective sports,” said Anand Iyer and Domenique Raso of BBDO Canada, official supplier and agency of record of the Canadian Paralympic Committee since 2010. “The training series offer an incredibly challenging full-body workout. We know the ParaTough Training Series will show people just how amazing our Canadian Paralympians are and inspire fans to cheer on the Canadian Paralympic Team as they compete in Rio in September.”

Canadians taking the #ParaToughChallenge are also invited to text PARATOUGH to 45678 to give $5.00 to support Canada’s future Paralympians.

The Rio 2016 Paralympic Games will take place September 7 to 18. Canada will send a team of approximately 160 athletes competing in 19 sports. Selection is ongoing and the full Canadian Paralympic Team will be officially announced later this summer.

About the Canadian Paralympic Committee: www.paralympic.ca