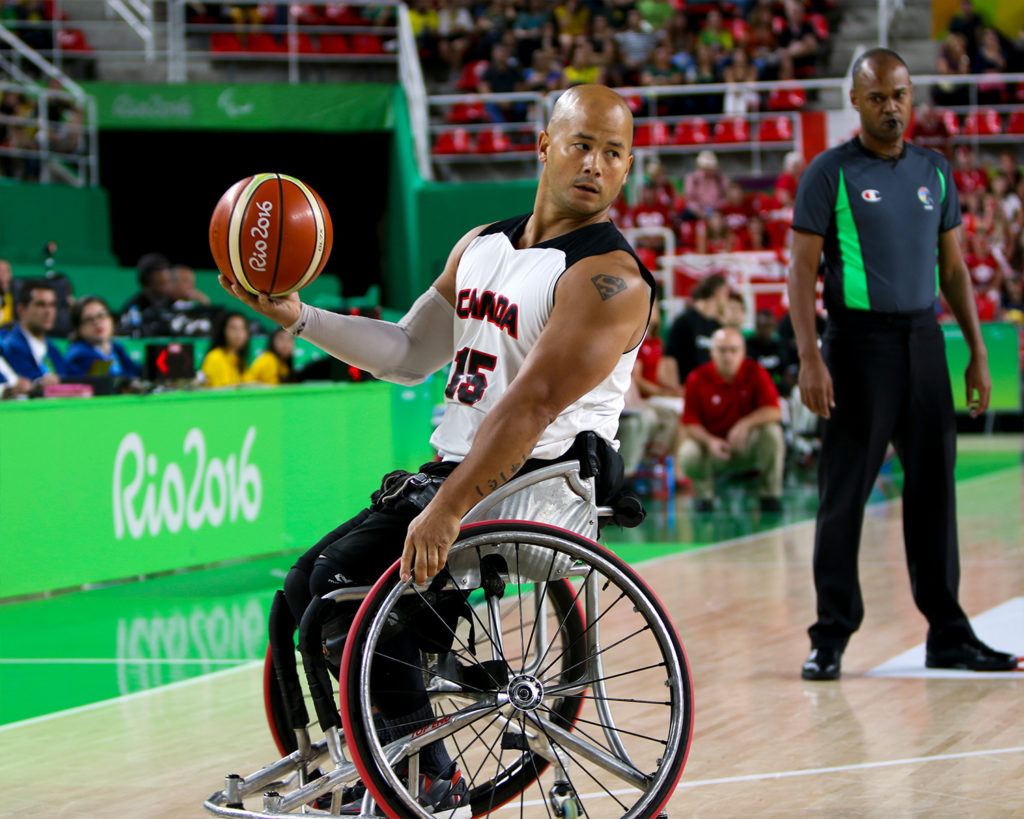 (August 26, 2019 – LIMA, PERU) It was a seesaw battle in the first half with the teams exchanging leads ten times before Canada settled into a rhythm and maneuvered past Mexico 74-48 to claim their second straight win in round robin play at the Lima 2019 Parapan American Games. Canada has one game remaining before the playoff rounds and their sights remain squarely set on advancing to the finals. The Canadian Men must finish on the podium in order to punch their ticket to the Tokyo 2020 Paralympics.

Mexico used their speed to their advantage early in the game to get behind the Canadian defenders. Following a number of easy points off fast breaks, Mexico held a 17-14 advantage at the end of the first quarter.

Canada turned to the calming influence of its veterans to help weather the storm and make some defensive adjustments that completely reversed the tides in their favour. They managed to limit Mexico to just eight points in the second quarter, while continuing to attack with vigor. As a result, Canada took over the lead 33-25 heading into halftime.

“The key to victory today was slowing down the game and being more patient. Letting the game come to us, and just understanding that we are great team. We trained hard and we have to put faith in our training and remain disciplined,” said David Eng of Montreal, Que.

“I learned a lot about the importance of controlling the pace when I started playing with players like Dave Durepos and Richard Peters. I remember being a young guy with a lot of energy and I couldn’t wait to start, but those guys taught me how to control the tempo whenever things are getting out of hand. We can play at a high pace and that high temp too, but sometimes you just need to slow it down. We really just had great mentors and we are applying those lessons now to the new guys,” said Eng.

It only took Patrick Anderson of Fergus, Ont. the first two frames to notch his second double-double of the tournament with 15 points and 10 rebounds in the first half. Alongside co-captains Bo Hedges of Wonowon, B.C. and Eng, the Canadian side seemed to be playing with ice in their veins. Hedges and Eng contributed 10 and four points respectively in the half.

“Today was a little like in boxing when in the first round you are trying to feel out your opponent a little bit. Then after you start attacking,” said Eng.

With Anderson and Hedges continuing to click on offense, Canada came out of the break on an eight-point run that stretched their lead to 16 points and forced Mexico to take a timeout. Anderson went on to set game highs with 26 points, 20 rebounds, and 9 assists, while Hedges put up 18 points, 3 rebounds, and 3 assists for Canada in the victory.

Nik Goncin of Regina, Sask. was the other Canadian to reach double-digit scoring with 13 points, and 4 rebounds.

“They were running on us really hard and they were a fast team, so they got four or five wide-open layups in the first half. I think that was the biggest adjustment, we didn’t let them get those in the second half,” said Goncin. “Immediately after our shot instead of crashing the boards looking for rebounds like we did in the first half, we just flew home. So then we always ended up with two or three guys back setting up on defence.”

Canada outscored Mexico 21-14 and 20-9 in the third and fourth quarter which included 38 points in the paint and five three-pointers on eight attempts.

“We need to clear the key for us to be able to get into the key. And unless we shoot from the outside the key is going to be full of trees basically. Those three-point shots stretch out the defence and sometimes those trees come out. And when that happens, that’s when we get in the key. It’s super important and an integral part of our offence,” said Goncin.

The Canadian Men will play their final round robin game of the tournament against Argentina Tuesday August 27 at 9:45pm ET.