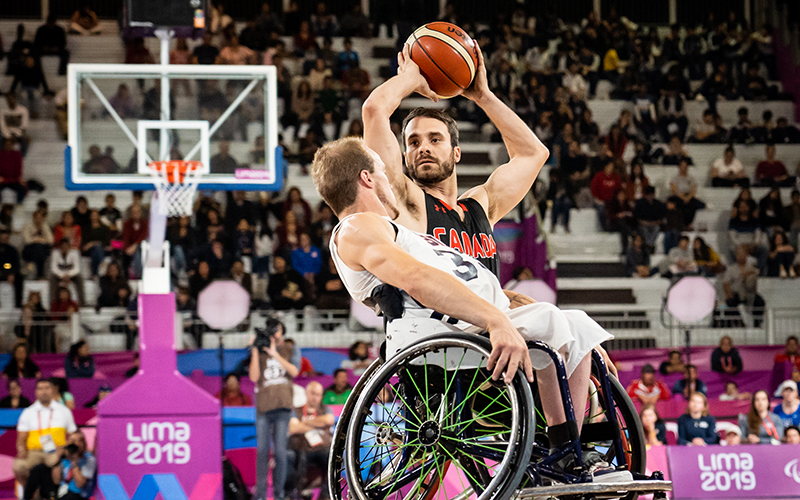 The competitive fire still burns bright for Chad Jassman. Even with the sporting world on pause, the Team Canada veteran intends to be more than ready when the red light turns green and he get back to tearing it up on the basketball court.

The two-time Paralympian and Paralympic gold medalist is making the most of the hiatus at home in Calgary during this challenging time.

“I’ve been holding up alright,” said Jassman. “The struggle for me is that I’m a bit of a chatty guy and need that social aspect of sport. It’s probably part of the reason why I play sports, so that’s been getting to me.

“But training-wise, I’m pretty lucky that I have my weight machine here and I can continue to lift weights all the time. I’ve got some sweet hills near my place so it’s easy to do some pushing up ramps and chair skills so that’s been working out.”

He also makes a regular habit of visiting his parkade for some additional chair skill reps “late at night when nobody catches me down there.”

Jassman still has his eyes set on the prize despite the Tokyo 2020 Paralympic Games being delayed until next year.

“I saw the writing on the wall that Tokyo was going to be postponed so it wasn’t a huge surprise for me. It was definitely a disappointment because it’s something that I’ve been working hard for. But the sentiment from around the world is the situation just gives you another year to train and get ready. This could be my last major Games and I’m super excited about it.”

Jassman is using the extra time to prepare for Tokyo by focusing on getting fitter and faster. He’s elevated the intensity level of his workouts and is spending more time fine tuning his chair skills. With no teammates to practice with and no hoops to shoot on, he’s gone all in on the less glamourous elements of training.

“There’s nothing else to do other than push and get fast, so it’s easy to stay accountable to yourself because you’re not able to cheat and just go do the fun stuff. If you’re somebody who can motivate yourself and stay focused through all of this, I think those are the types of athletes who can actually benefit from something like this. If you use this time properly you should come out a better player in the end.”

While isolated, he’s not alone. Team Canada is doing what it can to work together while apart to stay sharp and continue preparing for the Paralympics.

“We are working as a team and doing a lot of video scouting,” said Jassman. “We’re put in different groups every week and we scout different teams. We’re doing some things to stay mentally fresh and working on different strategies we can deploy against different teams and studying their habits.”

But in true “Jazzi” fashion, all work and no play isn’t his style. He’s one of the more charismatic personalities on and off the basketball court, from the creative stylings of his facial hair to his prized new RGK sport chair, which he specifically ordered in hot pink.

“I’ve been talking for years with teammates that I’ve always wanted a pink chair,” he said. “I felt like it would fit right in nicely with my game.

“My skill set is blue collar and I’m always working hard and trying to get under the skin of the bigger guys that I’m playing against. I enjoy that aspect of the game. I trash talk a little bit on the court and I like crashing and banging and having fun. The players I play against know that and I think they appreciate that a little bit so I thought the pink chair would really add to that.” 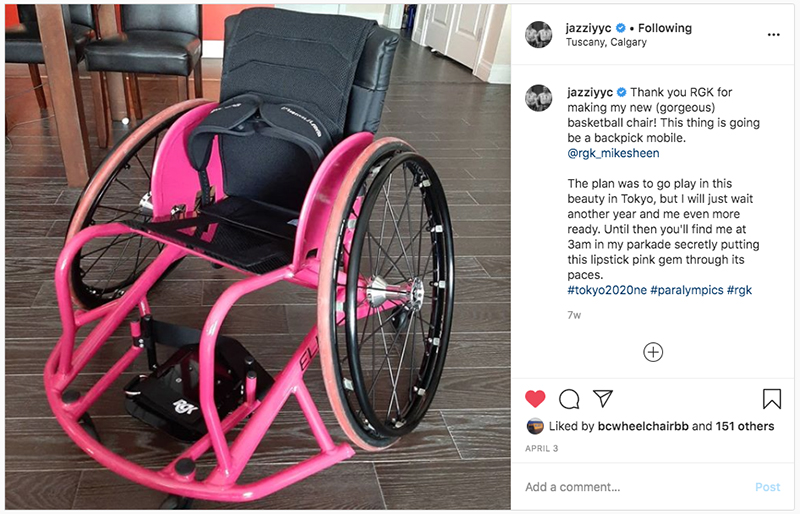 His plan was to hit the court in style with his new wheels in Tokyo this summer and donate $10 to breast cancer research for every basket he scored. It’s something he’s still considering for Tokyo next year, where he expects the competition to be at an all-time high at his third – and possibly final – Paralympic Games.

“The world is a lot tighter, especially on the men’s side, but I think it’s the best thing that can happen for wheelchair basketball. I think most people would argue that USA and Great Britain are probably the number one and number two teams, but then teams from third to twelfth could all beat each other. It’s really cool for the sport. It’s really fun going into games where nobody knows who’s going to come out on top.”

If Tokyo proves to be his swan song with Team Canada, it won’t be the last time we see Jassman on the basketball court.

Team Canada alumna Kendra Ohama approached him to coach the Calgary Rollers women’s club team a few years ago. At first, he wasn’t sure if coaching would be a good fit. Jassman is a fiery competitor who wears his emotions on his sleeve while on the court – which didn’t seem like the ideal temperament for coaching. But he took the plunge to find out in 2017.

“My first season I fell in love with it. As a coach, I’m nothing like I am as a player. I’m super calm. I don’t know if I’ll ever take a technical foul as a coach, whereas I’ve taken multiple as a player,” he laughed. “I find the ability to give back gives a lot to me and I think I do have a lot to give in return.”

He quickly points out that the Rollers won the women’s national title in his first year as the bench boss. Coincidence? He doesn’t think so.

“We won my first year so I can’t quit after that,” he said jokingly. “Now I’m just going to stick with it. I really enjoy it and I can see myself doing it for a long time.”

Give Jazzi a follow @jazziyyc and join the rest of Team Canada on the journey towards Tokyo: