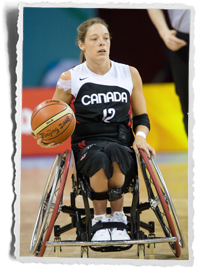 Franks spent two seasons with the Canadian Women’s National Wheelchair Basketball Team from 2006-2008. She was a part of the team that captured a fourth consecutive world championship title in 2006 and represented Canada in wheelchair basketball at the Beijing 2008 Paralympic Games.

Before hitting the hardcourt with the national team, Franks first made her mark on the track. She raced to a combined six Paralympic gold medals and one silver medal at the Sydney 2000 and Athens 2004 Paralympic Games. She is also a former world record holder in wheelchair racing.