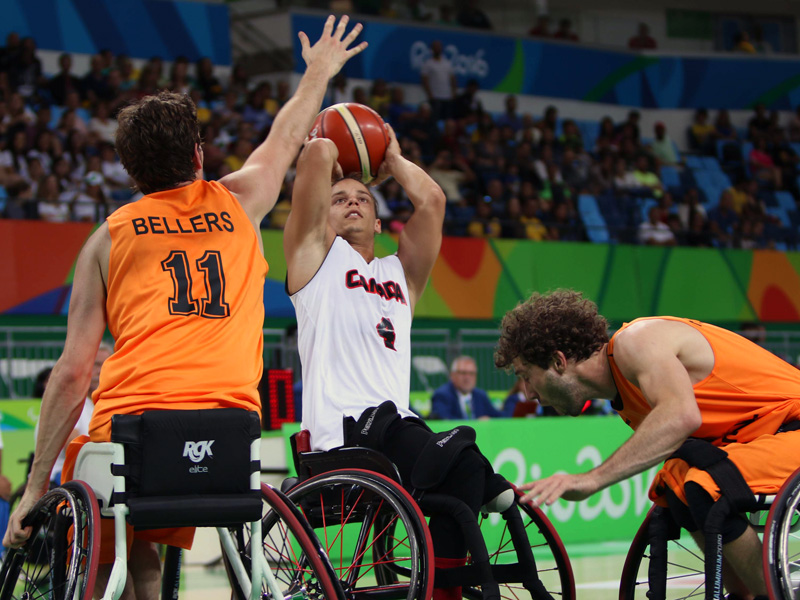 (Rio de Janeiro) The scoring woes continued for the Canadian men’s Paralympic wheelchair basketball team in a 49-32 loss to the Netherlands at the Carioca 1 Arena on Friday night in their second outing at the Rio 2016 Paralympic Games.

Both teams started off slow out of the gate by missing early opportunities to put points on the board in what proved to be a low-scoring game. Canada had the slight 10-9 edge after the opening 10 minutes of play and settled into a rhythm in the second frame, improving the lead to 19-15 at halftime.

Canada rebounded from a lopsided setback in their opening game against Spain with a more composed effort on the defensive side of the ball. Canada was much more aggressive defensively, limiting time and space for opposing shooters and clogging up the key.

Unfortunately for the Canadian side the Dutch shooters found their outside scoring touch with a 14-point run to open the third quarter. The Netherlands outscored Canada 18-4 in the frame to take a 33-23 lead into the final period. With the momentum in hand, the Netherlands cruised through the final quarter to pick up its first win in Group A.

Shooting was once again a factor in the game, as Canada shot just 25 per cent from the field compared to 36 per cent by the Netherlands.