Sport Continues to Be a Saving Grace for Tara Llanes 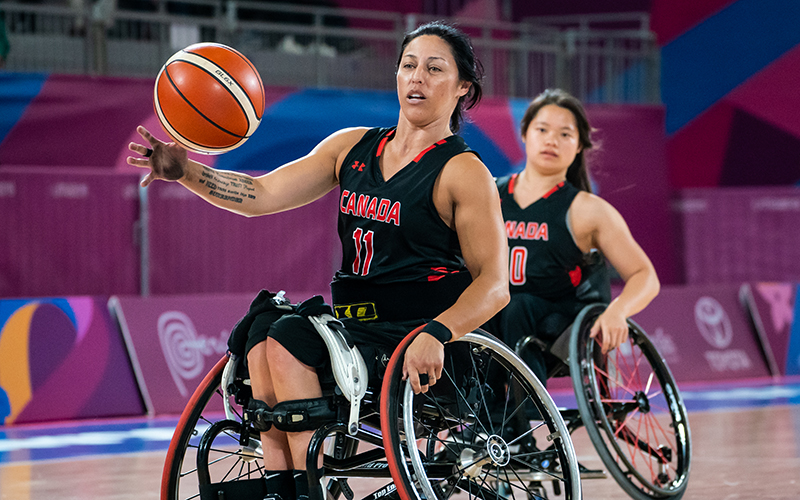 Athlete Tara Llanes has been on quite the ride in this journey we call life.

Born in the U.S., the California native grew up on a bike. She raced her way to the professional ranks in mountain biking in a 13-year career that included multiple medals at the X Games and on the World Cup circuit, as well as Olympic aspirations.

In 2007, she was forced to switch gears. Llanes crashed during a semifinal race and sustained a spinal cord injury. It was a dark time as Llanes struggled to find a new purpose. But just as sport had been her life before her injury, it was sport that also saved her.

Llanes made the move to North Vancouver to live with her partner Elladee. It was there that she discovered wheelchair tennis and the spark was rekindled. Competitive to the core, Llanes knew she wanted to compete internationally again. And she wanted to do it for Canada.

Llanes received her Canadian citizenship and ultimately swapped a tennis ball for a basketball. She made the Canadian Senior Women’s National Team in 2018 and hasn’t looked back since.

“I love playing for Canada. It just really wouldn’t be the same experience otherwise.”

Playing for Canada is on hold for now as Llanes rides out the pandemic in B.C. With basketball training and a lengthy reading list, she’s finding ways to fill the time. True to her roots, she is often found riding the trails in her adapted mountain bike.

“Now that I’m home this summer, I’m actually getting to ride because I haven’t gotten to ride the last two summers being with Team Canada and training in Toronto.”

Her passion for riding also blossomed into a small business.

“When I got hurt, some friends got this adapted mountain bike that had full suspension and it just looked like it could do things that I wanted to do. I was out on the trails and people would see me and say ‘I know someone who would love that bike or I’ve got a friend in a wheelchair’.”

Unfortunately, the company that made the adapted bikes didn’t sell them in Canada. In the mecca of mountain biking, this was a serious gap. So Llanes opened up shop six years ago as the company’s Canadian rep.

“I literally had no idea how to run a business. None. At all. But Elladee runs her own sales agency and she showed me the ropes of running a sales business. There was a lot of trial and error. There was a lot of error! It’s how I learned and I’m still learning so much but I’ve come a long way.”

Business is booming right now for Llanes. After months of inactivity during the lockdown, bike sales are way up which is keeping her busy.

Llanes feels fortunate to have settled back into a structured routine at home in B.C. amid the pandemic, but as a dual citizen whose family lives in the U.S., she’s also deeply concerned with what’s unfolding south of the border.

“I’m worried all of the time. My mom lives in Arizona and the hot spots are in California, Arizona, Florida and Texas. My mom has a compromised immune system and is obviously older and she lives alone. There’s a whole slew of things that I think about on a daily basis just being worried about my mom. It’s definitely worrisome with COVID. I call my mom and make sure she’s being smart and following the guidelines. She’s doing all she can do.”

Llanes has also been paying close attention to the momentum of the Black Lives Matter movement and the ongoing protests, actively sharing stories and resources on social media.

“It really breaks my heart with some of the things that I’ve seen and the way that human beings are treated because of the colour of their skin.

“I definitely feel strongly about it. For me personally, I want to continually educate myself. I’ve re-registered to vote in California and I haven’t voted in California since I moved to Canada. I’ve asked myself what I can do and that’s one of the things that I can do.”

Despite all of the turmoil in the world, Llanes finds peace on the basketball court. She recently got back on court at the Richmond Oval, which was a big boost to her system.

“I was super pumped to get back to the Oval and just push. I got a new chair a couple of months ago, but I had never pushed it on hardwood. It was really good to be in it on court and just get some shots up. I knew that I missed it but I don’t think I realized how much I missed it until I was on the court listening to my music and pushing.”

While she misses training alongside her teammates, Llanes feels she’s done all that she can do under the circumstances to stay at the top of her game. Still, she knows there is more work to do on the road to the Paralympics in Tokyo.

“The Olympics and Paralympics are the pinnacle of sport. As a high-performance athlete, that’s always where you want to be. To have this chance now to go to the Paralympics, it’s wild to me that it’s come full circle and happened in such a later part of my life. I’m super thankful for the opportunity that I have.”

Llanes has worked hard to get to this point, on the precipice of going to her first Paralympics. She’s holding out hope that Tokyo 2020 can take place next summer, but knows there are no guarantees. She’s focused on the bigger picture of what she can and can’t control.

“I just appreciate the days I have with the team. It sounds super cheesy, I know, but it’s really true. I really just love being on court with everyone. The other stuff is totally out of our control. My mentality is to keep my head down and train for Tokyo.”

One thing she is sure of – when the Games do resume, it will be a special moment that brings humanity together after so much adversity.

“Everyone is going to be starving for some really good vibes. I think when the Paralympics and the Olympics do go on, the world is going to be so pumped, more so than maybe ever in history.”

Follow Tara at @tarallanes / @tara_llanes and the rest of Team Canada: