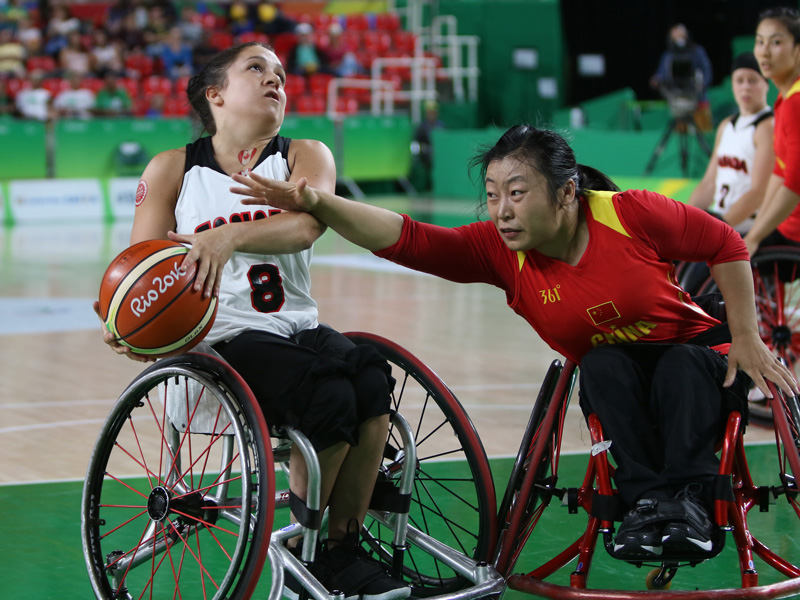 “It was a very close game. Lots of credit to China, but we just had that extra gear, a little more fitness, a little more push at the end, and I think it showed,” said Team Canada’s Tracey Ferguson, of Richmond Hill, Ont. “We wanted to represent our country well tonight. We certainly didn’t want to go out with a loss. As tough as it is sometimes to play in a 5-6 game, if you come out with a win you can hold your head up high when you know you have played well.”

Canada started well to take the early lead as China fought to maintain pace with the Canadians, who led 17-12 after the opening quarter. The trend continued in the second frame, as each time Canada pushed to extend the lead the Chinese would claw their way back into the game. Canada had a 26-20 advantage at halftime.

China battled to outscore Canada in the third quarter and mount a comeback, finally overtaking the Canadians 41-40 in the opening minute of the fourth quarter for its first lead of the game. Canada rallied to restore a four-point lead, before China came back once again to tie the game at 52-52 with 2:11 left to play in the game.

Canada’s Rosalie Lalonde, of Saint-Clet, Que., delivered with a game-breaking play by converting on a fast break while drawing a foul. She got the hoop plus the harm to complete the three-point play, spurring the Canadian side to an 11-0 run to end the game and capture fifth place.

“The last game is the one that everyone remembers and you always want to finish with a win,” said Lalonde. “It was really hard to focus because we were very sad about playing for fifth or sixth place. I had a really difficult first half, but at halftime I told myself this is the last game, this is the last chance, so it was time to just perform.”

Lalonde had 19 points for Canada, including going 7-for-9 from the free throw line. Fellow Quebecoise Cindy Ouellet, of Quebec City, had a game-best 20 points, while Janet McLachlan, of Vancouver, B.C., had 16 points and 25 rebounds to collect the double-double. Tianjiao Lei and Jiameng Dai each had 17 points for China.

The Canadian women delivered a strong finish against China to finish the competition with a 4-2 record, rebounding after a heartbreaking loss in the quarter-finals to eventual bronze medallist the Netherlands.