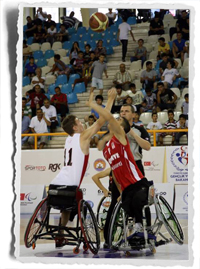 Team Canada was resilient and showed great composure to overcome the home crowd support and outlast a strong Turkish side. Turkey held the lead for most of the game, but with each push to extend the lead the Canadians would fight their way back to within striking distance on the scoreboard, never trailing by more than seven points. That perseverance paid off in the fourth quarter, as Canada took the late lead and never looked back.

“Top teams play solid games consistently and we challenged our athletes to do just that. They delivered in today’s game and carried over the positive momentum from yesterday’s quarter-final match against Sweden,” said Team Canada Head Coach Steve Bialowas.

“We played a complete game and our work ethic wore down the Turkish team in the fourth quarter. They had no answer for our strong push at the end of the game.

“They had no answer for our strong push at the end of the game.”

The opening quarter was a back-and-forth contest as both teams looked to rebound from quarter-final losses less than 24 hours earlier. Turkey edged Canada to seize the 19-16 lead after ten minutes of play. The teams matched each other basket for basket in the second quarter, scoring 12 points apiece as Turkey carried a 31-28 lead into halftime.

With a close game through three quarters of play, Canada broke out with a 14-2 run to open the final frame and take the lead, 56-49. Turkey could not keep pace with Canada’s potent offensive output in the fourth quarter as the Canadians outscored their Turkish counterparts 20-7 to the end the game.

With the Canadian victory, the Americas Zone has earned a second qualification spot for the next world championship in four years.

Canada will face Iran at 3:15 a.m. ET on Saturday September 14 to decide fifth place. Canada will look to avenge an 83-48 loss at the hands of the Iranians earlier in the preliminary round.

Sweden and Germany will meet in the gold medal game, while Australia and Great Britain will play for bronze.