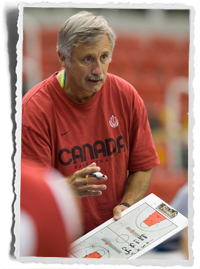 (Ottawa, ON) Wheelchair Basketball Canada is proud to announce that Tim Frick, former head coach of the Canadian Sr. Women’s National Team, will be inducted into the Hall of Fame in recognition of his exceptional career and outstanding contributions to the sport of wheelchair basketball.

“I am deeply honoured, humbled, and overcome with emotion,” said Frick. “I cannot begin to express my gratitude for the great experience that wheelchair basketball has given me. Just the thought of any of the amazing athletes, coaches, staff members and supporters who have been so influential in my life brings a tear to my eye.”

Frick will be formally inducted into the Hall of Fame at Wheelchair Basketball Canada’s annual awards banquet on Sunday, May 20, 2012 in Richmond, BC.

The awards ceremony is part of the festivities surrounding the 2012 National Wheelchair Basketball Championships, taking place May 18-20 at the Richmond Oval. Rick Hansen and the 25th Anniversary Relay will also be part of the National Championship celebrations on Sunday.

Frick, a native of Parksville, BC, served as the lead bench boss of the Team Canada Women from 1990-2009. In that time, he led Canada to an astounding decade-long undefeated streak in major international competition, as well as an unprecedented three consecutive Paralympic gold medals (1992, 1996, 2000) and four consecutive World Championship titles (1994, 1998, 2002, 2006).

Renowned for his coaching strategies both on and off the court, Frick’s tutelage solidified Team Canada as one of the most dominant teams in the history of Canadian amateur sports.

His induction into the Wheelchair Basketball Canada Hall of Fame is the latest addition to an extensive list of accolades, which includes the Coaching Association of Canada’s Geoff Gowan Award, Coaches of Canada Jack Donohue Award and the Queen’s Golden Jubilee Medal.