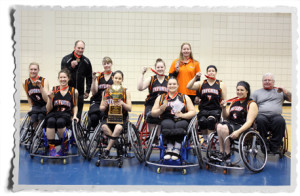 (Calgary, Alta.) The Edmonton Inferno seized the national crown with a 56-46 victory over the Calgary Rollers Sunday at the 2015 Canadian Wheelchair Basketball League (CWBL) Women’s National Championship at Mount Royal University in Calgary, Alta. Team Saskatchewan reached the podium for the first time at the event with a win in the bronze medal game over Quebec.

The win marked the eighth national championship club title for the Inferno in team history.

“Calgary is definitely one of our rivals and it’s always a back-and-forth game against them that is mentally and physically intense,” said Edmonton Inferno player Arinn Young, of Legal, Alta. “It was a great championship game for both teams. We pushed really hard and we came out on top against a great opponent.”

It was a great championship game for both teams. We pushed really hard and we came out on top against a great opponent.

The Rollers and Inferno set a vigorous tempo in the opening quarter, before Edmonton outscored Calgary 12-6 in the second frame to widen the narrow gap on the scoreboard. The Inferno held the 28-21 advantage at the break. Calgary battled to erase the deficit but the Inferno kept pace and secured the win. Young was once again a powerhouse for the Inferno, tallying a team-high 24 points. Diane Sorenson got the offense rolling for Calgary, scoring a team best 20 points.

Team Saskatchewan claimed the bronze medal after defeating Quebec 70-49. Saskatchewan captured the momentum early and converted on its offensive opportunities, including an 18-1 run to take the lead while Quebec struggled to find its rhythm. Precision shooting was the difference, as Saskatchewan shot 53.2 per cent from the field compared to 31.3 per cent for Quebec. Shelby Harrower led Team Saskatchewan with 27 points. Cindy Ouellet produced 18 points for the Quebec side.

The B.C. Breakers (0-4) placed fifth at the tournament after round robin play concluded on Saturday.