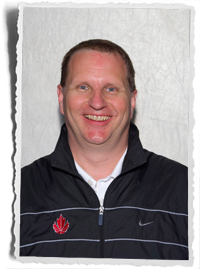 Canada opened its test series in Germany by playing Switzerland, a team they have not played in decades.  The Swiss have some excellent shooters and are very fast.  The first game of the series was a very close affair with Switzerland holding a 31-28 point lead at halftime.  Canada dominated the third quarter with some stellar defensive play and led going into the final quarter, 45–38.  The Swiss fought back and tied the game with 2.8 seconds left with a desperation 3-pointer that hit the bank, hit the rim, hit the bank and fell.  Coach Tonello called a timeout to advance the ball and set up a final shot.  The ball was inbounded to David Eng, who was poised in taking his shot, but was foiled on his attempt. The rebound dropped right into Brandon Wagner’s hand who quickly released his game winning put back shot at the buzzer as Canada claimed victory 59-57.

The second game of the day featured host Germany against Canada.  1,000 fans attended this game as wheelchair basketball is loved in Germany.  The fans were treated to a great game that ended tied in regulation at 61. The overtime was tightly contested but Germany hit two key shots after a Canada miss that sealed the victory at 72–67 and left the boisterous German fans very happy.

The next morning we again played the Germans and came out very strong, holding a 7-point lead at halftime.  The Germans came out absolutely flying in the second half of the game and dominated the Canadians at both ends of the court, easily winning 60-47.

The final game was a rematch with the Swiss. Canada got off to a horrendous start going down 12-0 before battling back to being only down one at the break, 29-28.  It was tied at 43 going into the final frame and the Swiss sharp shooters barely missed a shot leading them to a 67-57 victory.

This was a great opportunity for Canada to experiment with many different lineup combinations and also for the team to get in some very intense training over the next week.  They will also play two exhibition games during the week against RSV Lahn-Dill.