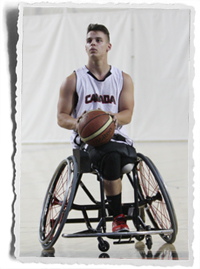 (Toronto, Ont.)  Shooting struggles by the Canadians, in combination with stout defense by their opponents in the second half of the game, resulted in Team Canada getting unexpectedly stung by Brazil 61-33 on the third day of competition at the 2015 Americas Wheelchair Basketball Challenge.

Canada is hosting Americas zone rivals Argentina, Brazil, and the USA at the Mattamy Athletic Centre March 22-26th for the friendly warm-up tournament that offers a sneak peak at the top competitors gearing up for the Toronto 2015 Pan/Parapan Am Games.

Canada’s offense went dry in the second half where they scored just 11 points over the final two quarters, and were outscored by their opponents 19-2 in the final frame. They finished the game shooting a meagre 25% from the field and 36% from the free throw line.

Brazil’s Luciano Silva impressed with his performance that saw him notch a game-high 24 points. Nik Goncin was the top scorer for Canada with eight points that included the game’s only three-pointer.

Interviews with Team Canada athletes and coaches can be scheduled by contacting Jody Kingsbury at 613-851-2337 orjkingsbury@wheelchairbasketball.ca.