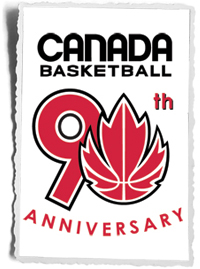 (Toronto, ON) Canada Basketball is celebrating its 90th anniversary! The country’s national governing body in the sport of basketball commemorates 90 years of hoops at home with the launch of a national multimedia campaign to provide fans with the opportunity to show that Canada’s Got Game.

Fans of any age or level of skill can show the country how innovative they can be when it comes to the game they love. Whether they are on the court with a ball or at home with a rolled-up pair of socks and a laundry basket, Canada Basketball invites fans across the nation to film their shot and share it online with the world to show that Canada’s Got Game – that #WECANBBALL.

The wealth of skill and passion behind the sport in this country runs deeper than those playing organized basketball. Michele O’Keefe, executive director of Canada Basketball, recognizes the contributions of those off-the-court and believes that “The backbone of a successful team, at any level, is the people who fill the stands. Without the support of this country’s basketball community, Team Canada would not be where it is today. This online campaign is our chance to give back to the fans and show that together, we are a nation of basketball.”

As the year unfolds, Canada Basketball will launch a series of initiatives in recognition of the past while tracing the journey of The Maple Leaf on the court.

In Canada, the game has seen an unprecedented level of growth and development in recent years. From children playing on the local court to the Senior Women’s National Team at the London Olympics; from high school hoopsters to a record eight Canadian players in the National Basketball Association to start the season – the country continues to show its support and dedication to the sport that a Canadian invented.

President and CEO of Canada Basketball, Wayne Parrish, is pleased with how far the game has come, but sees the coming year as an important stepping stone in the continued development of basketball in Canada. “At all age-groups of the game, our men and women have demonstrated the exceptional level of talent that this country possesses. In the coming competitive season, the collective efforts of our fine athletes, coaches and trainers will be on display for the world to see as Canada strives towards excellence on the international stage.”

It’s time for Canadians to show the world they’ve got game. We want to see your best shot. Use anything, anywhere: put a ball in a hoop, paper in a wastepaper basket, socks in a hamper, etc. – get creative and have fun. For a chance to win amazing Canada Basketball prizes, upload your video to basketball.ca. Then share your video with Canada Basketball and the world on Facebook and Twitter.