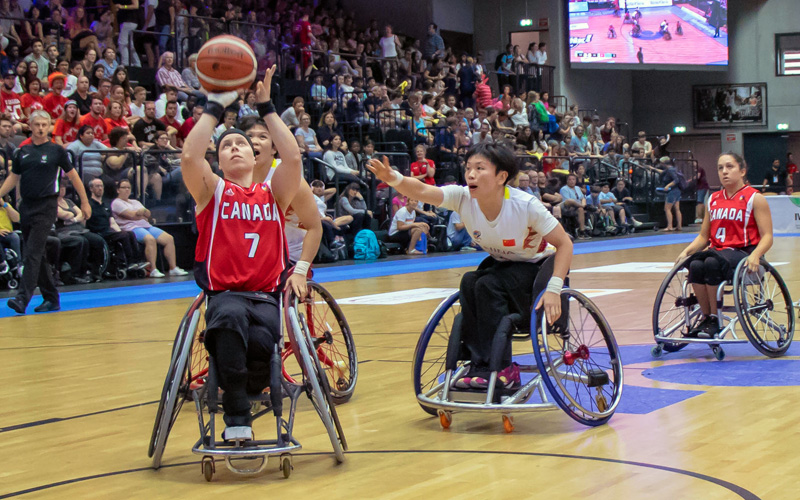 (Hamburg, Germany) The Canadian Women’s Wheelchair Basketball Team was eliminated from medal contention after a 63-56 setback to China in the quarter-finals at the 2018 World Championships on Thursday in Hamburg.

China was the better team on this day and executed well on both sides of the ball, while Canada struggled to get its offence and defence clicking in unison.

Cindy Ouellet (Quebec, Que.) was on fire early in the first half, but secondary scoring woes hindered Canada’s offensive output. China held a three-point lead at halftime, but defensive lapses and turnovers by the Canadians in the second half allowed China to stretch the lead. The Canuck offence heated up late in the fourth quarter, but with the clock working against them the Canadians ran out of time to close the gap.

“It’s a young team. We only have one starter who played in Rio on this team. It’s all players who need playing time and minutes against good teams to be better at this level,” said Team Canada head coach Marc Antoine Ducharme. “This experience helps us to grow up as a team. We still have two big years to improve and be ready for Tokyo.”

In the first quarter, the Canadians and Chinese fought back and forth for points, each exchanging baskets as the game stayed close. Through the first ten minutes, Ouellet led the Canadian offence with eight points on five shots to keep Canada within just three points. Canada converted often on the fast break, while stopping China from scoring any fast break points.

By the end of the half, the Canadians were still within three points of China as Ouellet continued to keep Canada in the game. She scored nine of Canada’s 13 second-quarter points, bringing her to a total of 17 points by the 15-minute mark of the game.

The Chinese extended their lead in the third quarter to 12, spreading the offensive production across four of their starters as they attacked from all angles on the court. While Young’s three-for-three shooting in the quarter sparked some offence for Canada, they weren’t able to keep up with China’s push.

After a slow start to the final quarter, Canada made one final push for a comeback in the last couple minutes of the game as Dandeneau nailed three more baskets. Unfortunately, with the Canadians still trailing, they tried to catch up with some three-point attempts but couldn’t quite close the gap as China held on to win 63-56 to advance to the semi-finals.

The Canadian women return to action in the consolation round on Friday for the chance to play for fifth place, while the Canadian men will play their final match in a placement game on Saturday.