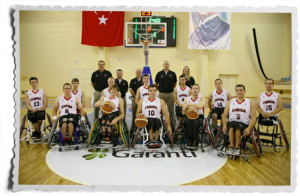 (Adana, Turkey) Canada completes the 2013 World Junior Wheelchair Basketball Championship in sixth place with a 3-5 record following a 67- 38 loss to Iran on Saturday.

Canada, who also lost to Iran in their final preliminary round game (83-48), did not match up well against the offensive depth of the Iranian side who for second game in a row had four players reach double digits in scoring, three of which also reached double digits in rebounds. Iran held Canada to a tournament low 25.8% shooting from the field and outrebounded them 52-34.

“Canada gave a tremendous team effort and can be proud of the way they battled hard all tournament including today against a tough opponent.”

“Nik [Goncin] led the team for seven games and carried the rest of the guys. Today the other guys carried him with everyone playing and nine of the guys hitting the scoresheet,” said Team Canada Head Coach Steve Bialowas.