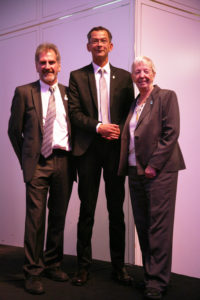 After more than 50 years as a dedicated basketball and wheelchair basketball volunteer, including 12 years as president of the IWBF, Orchard is stepping back from the sport to spend more time with her loved ones.

“Maureen is a lifelong builder and a tireless champion of wheelchair basketball and we are pleased to join the entire international community in recognizing Maureen and celebrating her immeasurable and outstanding contributions to the sport,” said Wheelchair Basketball Canada Executive Director Wendy Gittens. “With her vision and leadership, she sparked the evolution of wheelchair basketball in every possible way and her legacy will continue to have a meaningful impact on the growth and development of the game for generations to come.”

IWBF President Ulf Mehrens presented Orchard with the Gold Medal Triad and with the new title of honorary secretary general at the IWBF World Congress, which took place alongside the 2018 Wheelchair Basketball World Championships in Hamburg, Germany.

“IWBF can proudly determine the continued growth of our organization is inseparably connected to one name, Mrs. Maureen Orchard,” said Mehrens. “Without her, IWBF would not be where we are today, and no words can express our gratitude.”

The Gold Medal Triad is the highest honour in the sport. Orchard is the second Canadian to receive this honour, following legendary player and three-time Paralympic champion Chantal Benoit. The IWBF awards the Gold Medal Triad to individuals who have contributed to the growth and development of wheelchair basketball in an outstanding manner on both the national and international levels.

This latest recognition adds to a growing list of accolades for Orchard, who was inducted in the builder category to the Canadian Paralympic Hall of Fame in 2017 and the Manitoba Basketball Hall of Fame in 2015.
Orchard began volunteering in wheelchair sports in 1985. She was a key player in the establishment of the Canadian Wheelchair Basketball Association (CWBA) – now Wheelchair Basketball Canada – in 1993. She served as president of the CWBA from 1993-1998 and was inducted into the CWBA Hall of Fame as a builder in 1998.

In 1991, Orchard became involved at the international level with the IWBF. In various roles, including service on numerous boards and committees and at multiple world championships and Paralympic Games, Orchard has shaped the way in which the game is played, championed development within the international zones and enhanced opportunities for junior athletes and women around the world. This includes the introduction of age-specific world championships for both junior men and junior women, with both inaugural events being hosted in Canada.