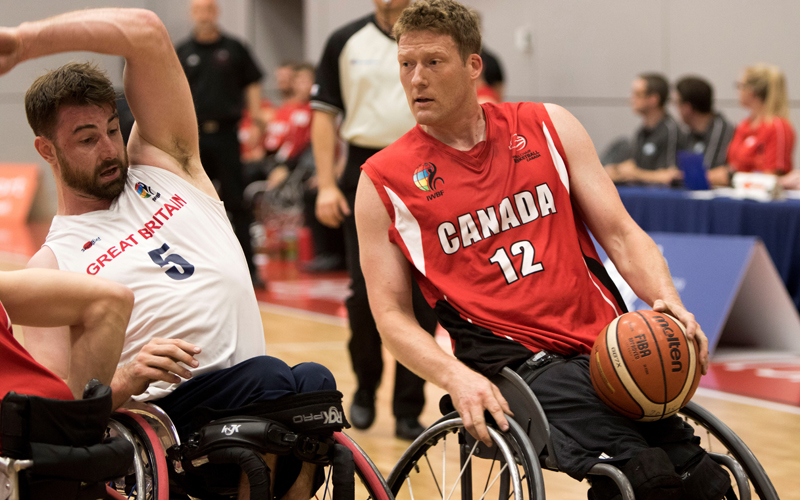 (Sheffield, U.K.) Coming off a three-game winning streak at the 2018 Continental Clash, the Canadian Senior Men’s National Team was unable to beat the hosts in the final game of the tournament, losing 78-57.

Great Britain cruised to an early 24-10 lead by the end of the first quarter after converting on multiple second chance points and dominating the paint. Though they had a few good looks inside, the Canadians just couldn’t score early on.

The Canadians slowed the British momentum by beginning the second quarter with a 7-2 run, but Great Britain neutralized the Canadian attack, as each team scored 17 in the second frame. At the end of the half, the score was 41-27 in favour of the home team.

Canada was outscored 22-4 in the paint in the first half, with Great Britain converting 12 points on second-chance looks.

In the third, Canada was forced to take some tough shots on offence while the British continued to score inside. Captain Bo Hedges committed his fourth foul midway through the quarter which resulted in head coach Matteo Feriani having to shake up the lineup.

Canada outscored Great Britain 17-15 in the third to cut the lead down to 12.

In the final frame, the hosts continued to put on the attack, increasing their lead to 20 late in the game. British captain Phil Pratt racked up boards and assists, distributing to Gregg Warburton, George Bates, Harry Brown, and Terry Bywater who would all finish in double-digit scoring.

Canada was unable to come back as Great Britain took the final game of the tournament 78-57.

Even though they weren’t able to come out of the tournament on a winning note, Hedges reflected on the importance of playing in tournaments against tough competition.

“A tournament like this allows us to start developing our game plan for the World Championships,” said Hedges. “There are a lot of our young guys who haven’t played against these teams before, so this is a good experience for them.”

Patrick Anderson, who was named to the tournament all-star team, finished with 31 points and 10 rebounds.

“I think we have an opportunity over the next month to play some games then go home and work on some things, make adjustments and continue to improve,” said Anderson.

The men finished the 2018 Continental Clash with three wins and two losses as they head into the final six weeks before the start of World Championships in mid-August.