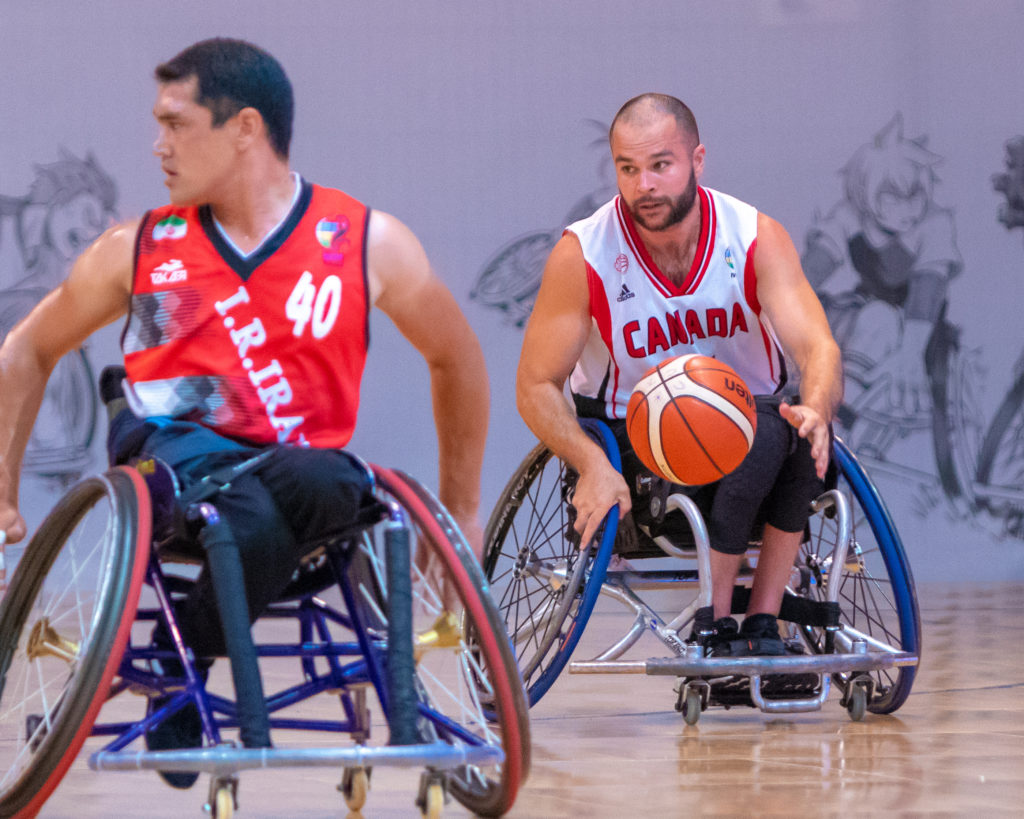 (Hamburg, Germany) The Canadian Men’s Wheelchair Basketball Team placed second in pool A after an intense 83-71 loss to the undefeated Iranian team on Monday at the 2018 World Championships in Hamburg.

The smaller Canadian side had trouble containing Iran’s height, with the latter dominating in the paint and repeatedly converting on turnovers by Canada. After building up a 22-point lead it looked as though Iran would cruise to victory early, but Canada was resilient and clawed its way back into the game, coming within two points of tying it up late before Iran closed it out.

The Canadian men will next play in a crossover match  against Poland on Tuesday at 6:15 a.m. ET, with the winner advancing to the quarter-finals. Their opponent and game time are to be announced. Meanwhile, the Canadian women return to action against the Netherlands at 12:30 p.m. ET on Tuesday.

Both teams were 2-0 entering the matchup, fighting for the top seed in pool A.

After a slow start by Canada, Iran established a formidable 29-10 lead in the opening quarter. But the Canadians were resilient in the second quarter, outscoring the Iranians 27-15 to get themselves back into the game.

“We didn’t hang our heads when we got down,” said David Eng (Montreal, Que.). “We were able to fight back. It was just a little too much of a big gap, but it shows the composure of our team, and the heart that we’ve got to be able to focus and battle to the end.”

Canada came within two points of tying it up with just over six minutes left in the game. However, the hot streak ended as they shot just three-for-13 in the final half of the fourth quarter.

“You know we were close enough and if we could have hit a few shots, maybe a couple of threes there or even just one to close that gap, we almost came all the way back,” said Patrick Anderson (Fergus, Ont.).

Anderson recorded game-highs in points (34) and rebounds (13) to secure his third double-double of the tournament.

While the Canadians were unable to come out victorious, they saw the experience as a positive heading into the later part of the tournament.

“We lost, but I think it was a great thing for our team because we have that experience with our team where we were actually down by a lot and came back,” said Eng. “I think our team needs that experience and to know we are able to do it.”

The Canadian men have proved to be among the top competitors in the tournament. Anderson leads all players at the end of round robin play in points per game (28) and average rebounds (12.6). Nik Goncin is also in the top 10 for average points (16.3 points per game).

Canada also leads the tournament with the most points for (226 total points and an average of 75.3 points per game) ahead of Iran (225) and the United States (223).