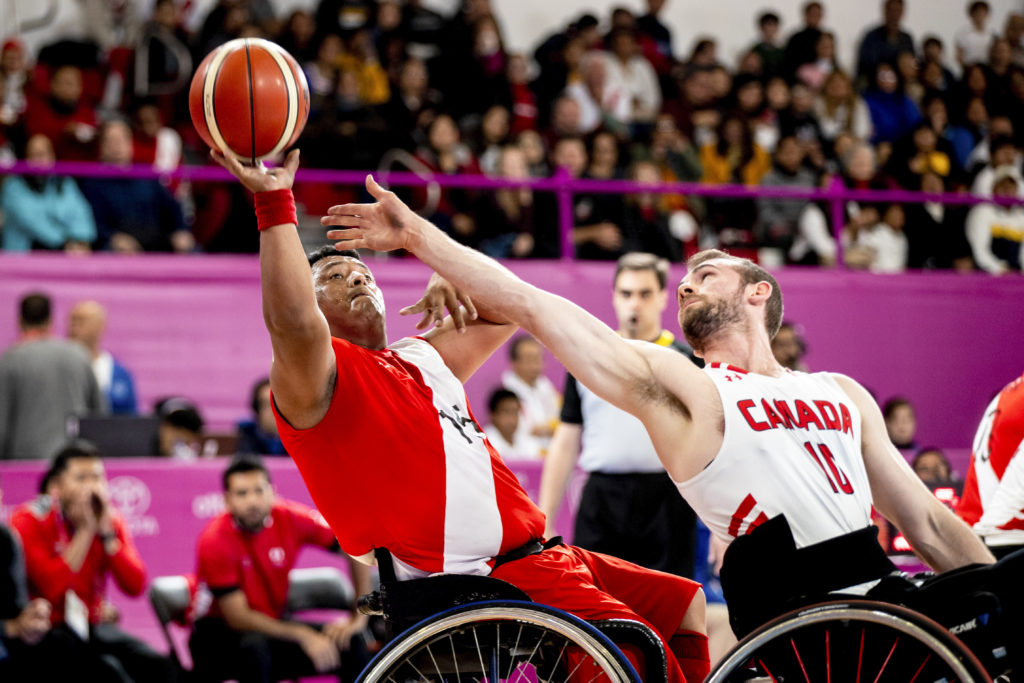 (August 28, 2019 – LIMA, PERU) The Canadian Men’s Wheelchair Basketball Team is one win away from earning a berth into the Tokyo 2020 Paralympic Games after trouncing Peru 78-31 in their quarterfinal match at the Lima 2019 Parapan American Games. The undefeated Canadians (4-0) will now face Colombia (3-1) in the semifinals on Friday. The winner of that game moves on to play in the gold medal final and is guaranteed a spot at next year’s Paralympics.

Vincent Dallaire of Quebec City opened the scoring 13 seconds into the game and Canada never looked back. They tallied a 26-5 lead in the first quarter and by halftime the spread increased to 47-12.

Deion Green of Victoria, B.C. scored a game-high 14 points and added 5 assists. Colin Higgins of Fredericton and David Eng of Montreal, Que. both had 13 points in the win. Eng also had 5 assists.

“It’s always a fun one playing the home team in their home Games, so that was a good time for us and a good push going into the semifinals. It was a fun one. All week the fans have been awesome. They have been cheering for Canada as well as Peru, but I knew tonight would be a pretty cool feeling for them. It was a great atmosphere,” said Chad Jassman of Calgary, Alta.

Canada versus Colombia is set to tip off at 11:30am ET while the other semi-final game will feature the United States (4-0) taking on Argentina (3-1) at 1:45pm ET. Canada defeated Colombia 64-51 earlier in the tournament when they met during their opening game of the round robin.

“Playing them in the round robin, we learned a lot from their team. We learned a few valuable lessons on who their main threats are and just how much speed and how dynamic that team can be,” said Jassman.

“It’s going to be an incredibly tough game. Colombia has been our toughest game so far this tournament. So, we have to come prepared. A win in the next game gets us to the gold medal match, that’s the goal. We are on a winning streak right now and it’s important to keep that momentum going” said Green.

Canada has finished in the top three in all five previous Parapan American Games they competed in. Canada won gold in 2003, silver in 1999, 2007 and 2015 and bronze in 2011. The Parapan Am tournament is the direct qualifier for the 2020 Tokyo Paralympic Games. The men’s team must finish on the podium to earn a berth into next year’s Paralympics.

“We have had our sights on 2020 for four years now, so it would be amazing to get the win on Friday. We have all been pretty hungry to get back there to the Paralympics. But not only the Friday, we want to win the semifinals and the next game,” said Jassman