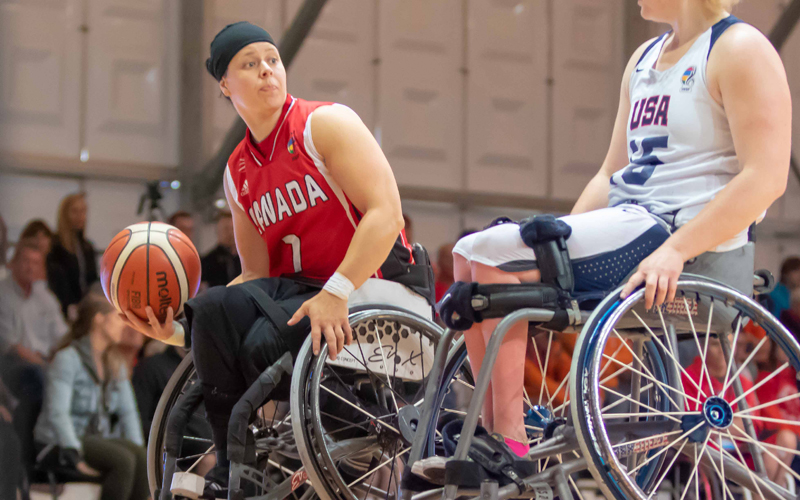 (Hamburg, Germany) The Canadian Women’s Wheelchair Basketball Team locked up fifth place at the 2018 World Championships courtesy of a decisive 68-53 victory over rival the United States on Saturday in Hamburg.

“I think we are building for the future,” said Canadian Cindy Ouellet (Quebec, Que.). “We have a young team and a young group here. We have only been working together for a few years, so it’s really promising for Tokyo. Winning today, we have something to build on. We are going to be ready and come out strong.

“We have a lot of talent on this team and a lot of the correct attitude. We cheer on each other, and build off each other. We support each other, the players and the coaches. All twelve players played today which shows we have a deep bench. It’s nice for all of us and nice for Canada that we were able to finish the tournament strong.”

The Canadians put on immense defensive pressure early and often, capitalizing on a staggering amount of turnovers by the Americans. Canada built up a 37-22 lead at halftime, including a three-point dagger from Young to close out the half.

With a significant lead in hand, Canada utilized its depth down the stretch with the full roster getting into the game. Overall, the Canadians were rewarded for solid defensive play and a killer instinct in transition, as Canada converted 22 points off of American turnovers. 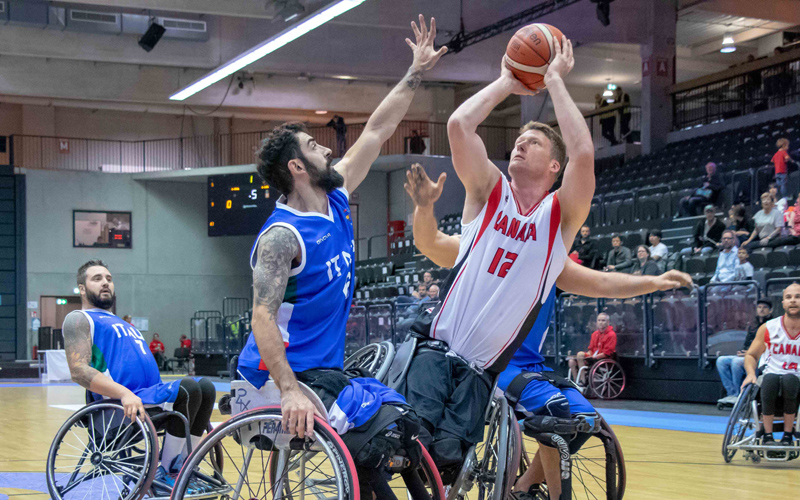 The Canadian Men’s Wheelchair Basketball Team placed 12th at the 2018 World Championships after falling just shy of a comeback in a 70-66 loss to Italy.

“Twelfth is not what we came here to do, so it’s very disappointing,” said Canada’s Patrick Anderson (Fergus, Ont.). “It’s going to take a little bit of time to get past it. I hoped that even if we didn’t win a medal here that we would be close enough that we could see a few things that we could work on to be better to close the gap between us and the best teams.

“I thought the gap was this big and it turns out that the gap is this big. That’s a little discouraging in the short term. I think we just need a little bit of time to get over the disappointment and then start working on what we can work on to close that gap between now and Tokyo.”

“We are hoping for a good result in Tokyo in two years,” said Team Canada co-captain Bo Hedges (Wonowon, B.C.). “This tournament is about getting experience for our younger guys that haven’t been to a world championship, that haven’t had that many tight games like this to play in at this type of event. So this is a learning process. We are building forward. We have a lot to learn. And the world is so much stronger now. There are so many great young players here. So the more we can play against them the more we can learn and the better we will become.”

Nik Goncin (Regina, Sask.) dropped a game best 30 points for Canada, while Anderson picked up his fifth double-double in five games on the strength of 22 points and 11 rebounds.

The Canadian men missed the mark against Italy in a rough but otherwise even match, shooting just 38 per cent from the field compared to 47 per cent by the Italians.

The Canadian offence struggled to find its rhythm through three quarters, while Italy shot well from the outside en route to a 56-46 advantage going into the fourth quarter.

Canada showed character by coming out firing in the final frame, erasing the deficit to tie the game 66-66 with 38 seconds left. Italy hit a clutch layup to go up by two and closed out the game from the free throw line to hold on for the win.