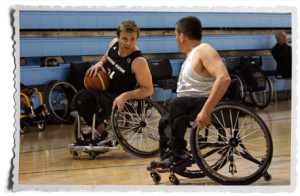 Nine of the country’s top competitive club teams are vying for a shot at the national title at the Toronto Pan Am Sports Centre in Scarborough, Ont.

“The tournament is off to a great start and the combination of fierce competition and tremendous sportsmanship demonstrated by all of the athletes showcased why wheelchair basketball is truly a sport for everyone. We saw today why this tournament is the premiere national event on the domestic calendar in Canada,” said Wheelchair Basketball Canada Executive Director Wendy Gittens.

The round robin competition resumes Saturday as teams jostle for position and battle for a berth to the medal games. The bronze and gold medal games are set for 9 a.m. ET and 11 a.m. ET, respectively, on Sunday.

The Variety Village Rolling Rebels started the day off with a 73-56 decision over CIVA de Montreal. Jesse McNalley paced the Rebels attack with 33 points, while teammates and Team Canada veterans Abdi Dini and Adam Lancia, both of Scarborough, Ont., each tallied 16 points. Benjamin Palmer led all CIVA players with 22 points.

The reigning champion Bulldogs entered the win column by cruising to a 75-28 victory against the Southern Ontario Suns. Maxime Poulin scored a game-high 28 points for Quebec, while Paralympian and world champion Tamara Steeves dropped 17 points on behalf of the Suns.

The Gladiateurs seized the momentum early with a torrid pace in the opening quarter, outscoring the Royals 20-6 through 10 minutes of play. Carl Pelletier produced a team-best 24 points for the Laval side. Ross MacDonald countered for the B.C. Royals with 21 points.

The Academy club team began its quest for gold on a winning note with a 68-38 win over the Burlington Vipers. After a close start to the game, the Academy dominated play in the second and fourth quarters to secure the win. Team Canada co-captain Bo Hedges led all players with 24 points for the Academy team. Aaron Moseley-Williams registered 22 points for the Vipers.

Variety Village improved its record to 2-0 with a 55-37 win against the Southern Ontario Suns. The Rebels stormed out of the gate en route to a 25-8 advantage after the opening quarter and never looked back. National team player Abdi Dini registered double digits with 12 points for the Rebels. Kevin Wakeling and Tamara Steeves each scored 10 points for Southern Ontario.

The Northern Lights defeated CIVA de Montreal 61-50 in their first game at the national championship. The Lights found themselves in a 32-25 deficit at halftime before turning the tide in the second half. Alberta outscored CIVA 36-18 in the final two quarters to secure the comeback win. Ben Moronchuck had 24 points for Alberta, while brothers Benjamin and Nicolas Palmer tallied 16 points apiece for CIVA.

A strong offensive showing propelled the Academy team to its second win after the club outlasted the B.C. Royals 79-51. The National Academy’s Mitch Bossaer led all players with 22 points, while teammate Bo Hedges chipped in with 17 points. Ross MacDonald countered for the B.C. Royals (0-2) with 16 points on the strength of a strong second quarter in which he notched 10 points.

“We definitely got off to the start we wanted today,” said Academy athlete Christina Swett. “Since we are a little undersized compared to some of the teams, plus the fact that we are dealing with a few injuries and playing with a short bench, we weren’t exactly sure how we’d fair. Now our attention turns to tomorrow when we get to match up against some of the other top teams.”

The Gladiateurs de Laval picked up a commanding 73-46 win against the Burlington Vipers to secure a flawless 2-0 record on opening day. David Eng was the top point producer for Laval with 23 points, 19 of which he scored during a dominant first quarter. Laval’s Marc-Antoine showed off his range by draining a pair of three-pointers as part of his 17-point effort. Brandon Wagner led the way offensively for the Vipers (0-2) with 16 points.

The Bulldogs de Quebec posted 68 points in a decisive 68-40 win against the Alberta Northern Lights (1-1). Quebec (2-0) executed on both sides of the ball to double up in the win column. Bulldogs player Maxime Poulin scored a game-high 25 points, while Mickael Poulin wasn’t far off the pace with 20 points. Ben Moronchuk guided the Lights offense with 16 points.

“I know the score doesn’t necessarily reflect it, but we got off to a bit of a slow start today. It’s only Friday but we know that tomorrow we need to improve our concentration and have big games from start to finish if we want to play in the final on Sunday. The team that makes the fewest mistakes will be one that comes out on top so we have to come ready to play,” said Bulldogs player Kevin Poulin.

CIVA captured its first win of the tournament by ousting the Southern Ontario Suns 60-32 to conclude play on opening day of the competition. Benjamin Palmer was the offensive catalyst for CIVA (1-2), chiming in with a game-high 24 points. Alexander Courcelles also reached double-digits with 18 points for CIVA. On the other side Kevin Wakeling and Michael Kilonzo tallied eight points apiece for the Suns (0-3).

The Canadian Wheelchair Basketball League (CWBL) was founded in 1986 and has two primary divisions: the Open division and the Women’s division. The league features wheelchair basketball club teams from across Canada and culminates each season with a national championship for both the Open and Women’s divisions.
The league is fully integrated as both divisions welcome athletes with a disability as well as able-bodied athletes to play in the spirit of competition. It often features some of the country’s best wheelchair basketball players, including past, present and future members of Team Canada.