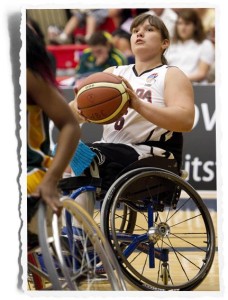 (Ottawa, ONT) The Canadian Women’s U25 Wheelchair Basketball Team has its sights set on a podium finish at the 2015 Women’s U25 World Championship in Beijing, China. After a whirlwind week of final preparations, Team Canada will be poised to pursue excellence come opening tip off at the National Training Centre in Beijing on June 30, 2015.

Jacques, along with Arinn Young (Legal, Alta.), Erica Gavel (Prince Albert, Sask.) and Rosalie Lalonde (St-Clet, Que.) will be dominant forces for the Canadian side. All four athletes will also be competing with the Senior Women’s National Team at the Toronto 2015 Parapan American Games in August. Confidence is especially at a high for Jacques and Young, who both won world championship gold with the senior women last summer. A veteran, Jacques is the sole member on the team who competed at the London 2012 Paralympic Games.

With a combination of veteran leadership and youthful enthusiasm, Team Canada is prepared for the high level of competition it will face as it pursues the podium.

On June 30 at 4 a.m. ET Canada opens competition against a very young Great Britain squad with an average age of 18 compared to Canada’s 20. Great Britain ranks third going into the world championship after defeating the Canadians for bronze in 2011. Canada then takes on junior women’s world championship newcomer and host China, along with fifth ranked Japan and sixth ranked Germany on July 1st, 2nd and 3rd respectively. Canada closes out round robin play against 2011 Women’s U25 World Championship silver medalist Australia.

The top four teams in round robin action will advance to the semifinals on July 5, 2015, while the two remaining teams will decide fifth place. The bronze and gold medal games are set for July 6, 2015.