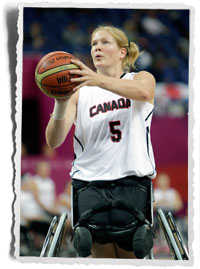 (LONDON) With a solid performance on both sides of the ball, the Canadian Women’s Wheelchair Basketball Team secured a berth in the quarterfinals at the London 2012 Paralympic Games with a 65-51 win against Brazil Sunday.

The Canadians forfeited the lead only once in the opening minutes of the game and went on to lead by as much as 22 points before the final buzzer. Canada led 31-23 at the half before putting the game out of reach with a 14-0 run in the fourth quarter.

Janet McLachlan, of Vancouver, BC, delivered another monstrous offensive performance with 36 points and 23 rebounds, shattering her career bests in both categories at the Paralympics en route to the double-double.

“It was a great game. They are a tough team,” said McLachlan of the Brazilians. “They’re feisty, they don’t ever give up and we have to play through that but it’s a good win to have.”

With the win, Canada improved its record to 2-1. The team wraps up preliminary round play with an afternoon tilt against the hometown team from Great Britain at 1pm on Monday, September 3rd at North Greenwich Arena. 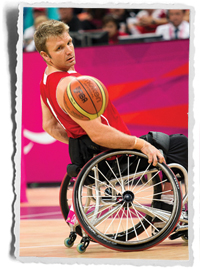 With a 73-66 win over Germany, the Canadian Men’s Wheelchair Basketball Team improves to 4-0 at the London 2012 Paralympic Games and secures the top spot in their pool. A dominant second quarter proved to be the difference for Canada. Spurred on by six consecutive buckets by Bo Hedges, of Wonowon, BC, Canada went on a ten-point run and captured a 27-20 lead. Outscoring their opponents 19-10 in the second quarter, the Canadians limited Germany to just two points in nearly a six-minute span.

“Being first place in the pool with one match to go gives us a little breathing space, but only a little. The crossovers will be tough, so I’m not taking much consolation in this win. We have to remain aggressive, maintain the pressure,” said Team Canada Men’s Head Coach Jerry Tonello.

Patrick Anderson, of Fergus, Ontario, continues to wield magic on court – he had his second triple-double of the tournament with 25 points, 15 rebounds, and 12 assists.

While Hedges was one of the game’s most deadly shooters going 11-for-18 (61%) from the field and finishing with 24 points, the game’s highest scorer was Dirk Passiwan who tallied 29 points, 8 rebounds, and 8 assists for Germany.

With the victory Canada exacts a degree of revenge on Germany who edged them in the championship game of their final pre-Paralympic warm-up tournament in Holland.

Canada will pursue further redemption when they conclude round robin play in Pool B on Monday September 3rd at 10:45am BST against Colombia – the team that upset them in the semi-final of the 2011 Parapan American Games. Colombia went on to finish second, while Canada settled for bronze.