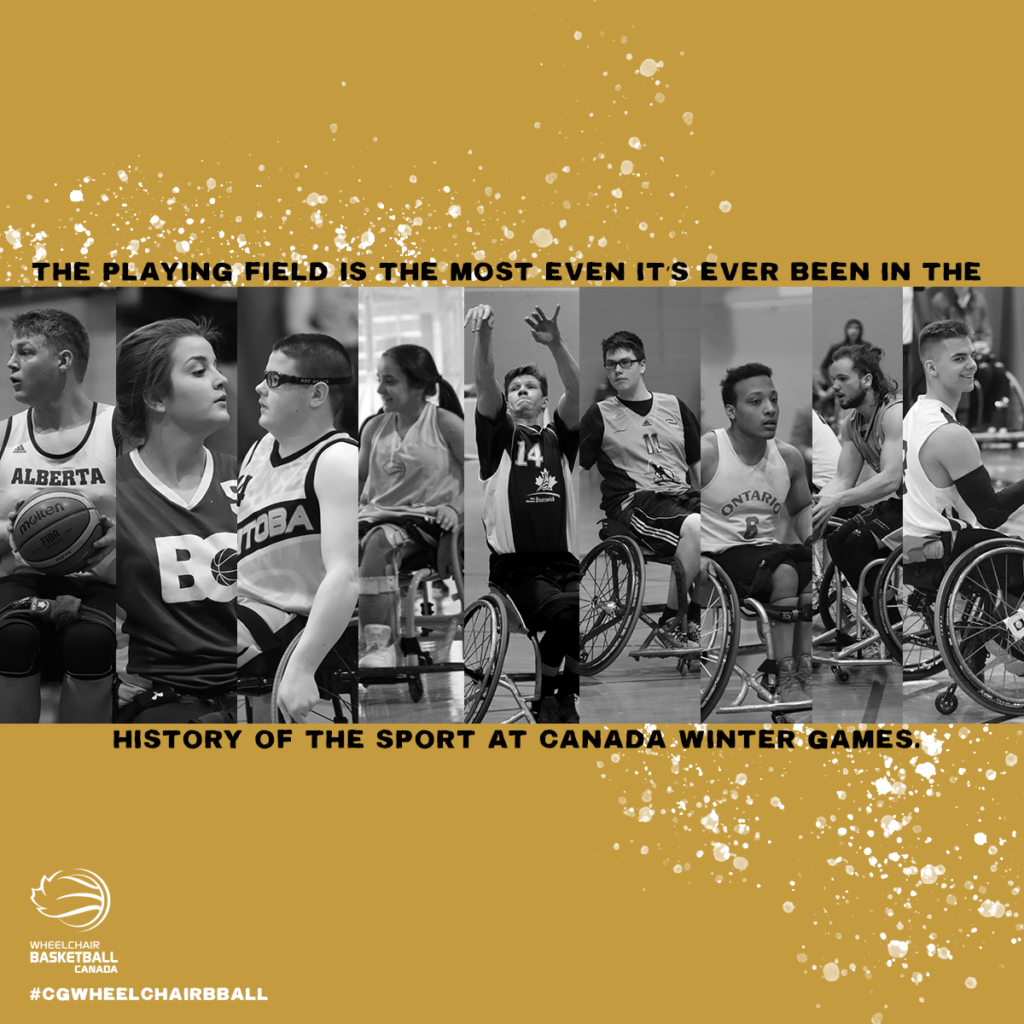 All of the best up-and-coming junior wheelchair basketball athletes in Canada will be vying for the championship title at the 2019 Canada Winter Games in Red Deer, Alberta next week. The Canada Games take place from February 15-March 3, 2019 and the wheelchair basketball competition will run from February 17-21 at the Gary W. Harris Canada Games Centre.

Wheelchair basketball figures to be one of the top draws on the program in Red Deer, as the elite skill and athleticism on display makes for a highly competitive and captivating spectator sport. The competition will also showcase the inclusivity of wheelchair basketball, as both able-bodied athletes and athletes with a disability compete together on a level playing field.

This year, the competition will be an exciting one as the playing field is the most even it’s ever been in the history of the sport at the Canada Winter Games. Nine provincial teams will compete in the wheelchair basketball competition. Pool A features Quebec, Saskatchewan, New Brunswick, and Manitoba; while Alberta, Ontario, British Columbia, Nova Scotia, and Newfoundland will battle it out in Pool B.

POOL A
Quebec is the team to beat as they will be going for their fifth consecutive gold medal at Canada Games this year. Quebec placed second at the junior national championship in 2018, which served as the seeding tournament for the 2019 Canada Games. They have a strong roster, including Benjamin Palmer (Montreal) and Élodie Tessier (Saint-Germain-de-Grantham)—both of whom competed at the 2015 Games. Palmer is a member of the Black Aces, a team of elite able-bodied athletes who often train alongside the Canadian Senior Men’s National Team, while Tessier is an up-and-coming athlete on the Senior Women’s National Team. 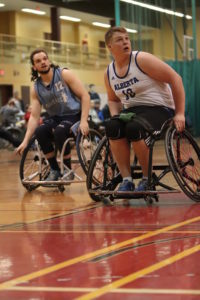 “When training for a big event like Canada Games, it’s very important to prepare physically but also mentally, as the competition will be at a very high level,” says Tessier. “This will be my last Canada Games and I am honoured to get to represent Quebec. My role on the team will be quite different from 2015 as I now play more of a leadership role to our younger players, who I hope can benefit from my experience. There will be some close matchups this year. Every team has a shot at the podium.”

Team Saskatchewan is looking for a rematch, as they lost in the final of the 2015 Canada Games to Quebec and settled for a silver medal finish. There will be quite a different roster this year, however, with seven of the 12 athletes on Team Saskatchewan competing at Canada Games for the first time. The team captured a bronze medal at last year’s junior national championship. An athlete on the rise with Team Canada, Garrett Ostepchuk (Regina) will be a force on the hardcourt.

Team New Brunswick is coming into Canada Games in the middle of the pack as the sixth seed, which is the same slot the team found itself in when the dust settled at the last tournament in 2015. Alex Hayward (Campbellton) returns as one to watch, after he captained Team Canada at the 2017 Men’s U23 World Championship. Rising stars Danielle Duplessis (Sackville) and Westley Johnston (Kinkora), who played alongside Hayward for Canada at the junior world championship, are both training in the National Academy development program in Toronto with coach Mike Frogley, where they have spent the last six months training hard every day and honing their skills.

Team Manitoba rounds out Pool A looking to improve their record. The young team finished ninth at the 2015 Games. They’re coming to Red Deer as the seventh seed and have a tough pool to compete against. Winnipeg athletes Bethany Johnson and Josh Brown are both on the fast track to success. Johnson is on the radar for the women’s national team program, while Brown has been training in the National Academy program and has played with the Toronto Rollin Raptors division 2 team this year.

POOL B
Alberta has home court advantage and is coming into Canada Games as the top seed. Wheelchair basketball made its debut at the Canada Games in 1995 in Grand Prairie, Alberta, where the host team won a gold medal. The current crop representing Alberta is looking to repeat history and they have a solid roster to do so, led by Bradon Doll (Camrose), Helaina Cyr (Sherwood Park), Ben Tumack (Edmonton), and Reed De’Aeth (Sherwood Park). Doll was named the MVP at the 2018 Junior National Championships, while Cyr, Tumack and De’Aeth are emerging athletes who have trained with the national team program. 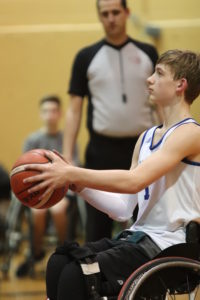 Team Ontario is on the rise, with eight Canada Games rookies and four returning players from the 2015 Canada Games. Ontario placed fourth at junior nationals in 2018. Toronto athletes Adel Akhmed, Sara Black, Puisand Lai, and Lee Melymick all have enjoyed stints on the Canadian senior national teams, which is a promising sign for Team Ontario. Veteran player Eric Voss (St. Mary’s) will compete at this third Canada Games.

“The competition this year at Canada Games will be intense,” said Lai. “There are a lot of other provinces that are around the same competitive level as us, so there should be a lot of very good games and I’m excited to see how it will play out. Team Ontario has been preparing very hard for this for the last four years.”

Team British Columbia is coming in with a young group that has been training hard for four years and has seen amazing growth. Although they are entering the competition in the middle of the pack as the fifth seed, their team has shown that they can compete with anybody if they play their best. Team captains Ben Hagkull (Chilliwack) and Joel Ewert (Prince George) are leading the charge for what is sure to be an exciting competition. They are joined by fellow returnee Ben Garrett (Abbotsford). Hagkull and Tanner Jung (Langley) also appeared for Canada at the junior world championship in 2017.

Team Nova Scotia is another young side looking to improve their record as their highest finish at a Canada Games was in 2011 where they came in fifth place at home in Halifax. The club placed eighth at the junior national championship in 2018, mirroring the team’s eighth place finish at the last Canada Games in 2015. The team is led by Benjamin Power (Cole Harbour), who was the highest scorer for Nova Scotia in the 2015 Canada Games.

After a 12-year hiatus, Team Newfoundland is returning to Canada Games this year and is looking to make a mark with their aggressive and competitive play. The team is led by Danielle Arbour (Goulds), who was a fixture for Team Prince Edward Island at the 2015 Canada Games and also has international experience with the Women’s U25 National Team in Beijing, China at the world championships in 2015, and Nick Power (Paradise) who competed in the 2007 Canada Games for Newfoundland.

The Canada Winter Games wheelchair basketball competition will be one for the books! With such a dynamic group of teams this year, we may be looking at a few upsets as a number of teams can beat anyone on any given day. Don’t miss the exciting action and tune in from February 17-21! All of the games will be webcast live and you can follow all of the action on social media with the hashtag #CGwheelchairbball.

About the 2019 Canada Games
From February 15 until March 3, 2019, the eyes of the nation are on Red Deer, Alberta at the 2019 Canada Winter Games – the largest multi-sport and cultural event for youth in Canada and the largest event to be hosted in Red Deer’s history. Featuring over 150 events in 19 sports and a major arts and cultural festival, the 2019 Canada Winter Games welcomes up to 3,600 athletes, managers and coaches and more than 100,000 spectators, with a significant forecasted economic impact. The 27th edition of the Canada Games, the 2019 Games is set to provide a stage for Canada’s next generation of national, international, Olympic and Paralympic champions to compete and leave a legacy for athletic and leadership greatness in Red Deer and central Alberta.

For more information on the 2019 Games, please visit: canadagames.ca/2019