(Toronto, Ont.) The host Canadians have advanced to the quarter-finals at the 2017 Men’s U23 World Wheelchair Basketball Championship and will take on Japan on Wednesday at the Mattamy Athletic Centre in dowtown Toronto.

Australia, France, Germany, Great Britain, Iran and undefeated Turkey also advanced to the quarter-finals after the conclusion of preliminary round play.

Germany and Japan opened the final day of preliminary action with the first of the day’s well matched games.

The game had spectators on the edge of their seats as the teams exchanged baskets and leads throughout the first half. Going into the second half the teams found themselves tied 34-34. It appeared the game would continue in a similar vein until the Germans made a 11-2 run against the Japanese at the end of the third quarter. Taking that momentum into the final stretch, Germany’s defensive pressure kept a comeback by the Japanese at bay.

“It was a lot of fun because we know that Japan is very quick and it’s not always easy to play against the quick teams,” said player of the game, Germany’s Oliver Jantz. “It was nice, especially after the half, when we thought that we were already tired that we were able to push and bring it home in the second half. The key was the good defense, we had a good rotation on defense.”

The game high point producer was Leon Schöneberg of Germany with 28 points, with Japan’s Renshi Chokai coming close with 25 points. 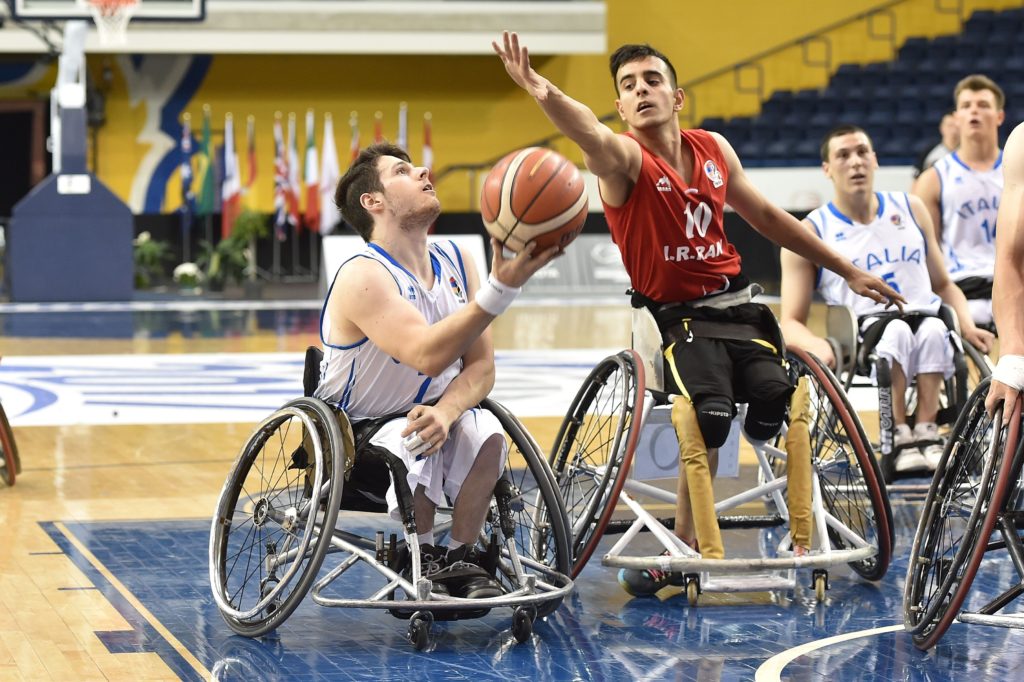 The second game of the day saw Iran and Italy jostling for a berth to the quarter-finals, which Iran clinched with a 60-56 win.

After an evenly matched start, Italy managed to break away from the 12-12 tie at the end of the first quarter with a nine-point run in the second. Iran pushed hard to erase the deficit and was able to step up after half to limit Italy’s offense and surpass them in the fourth quarter, outscoring them 25-13 to take the win.

Mohammadhassan Sayari once again notched a double double with 14 rebounds and the game-high 29 points. Dario di Franceso countered with 22 points for Italy. 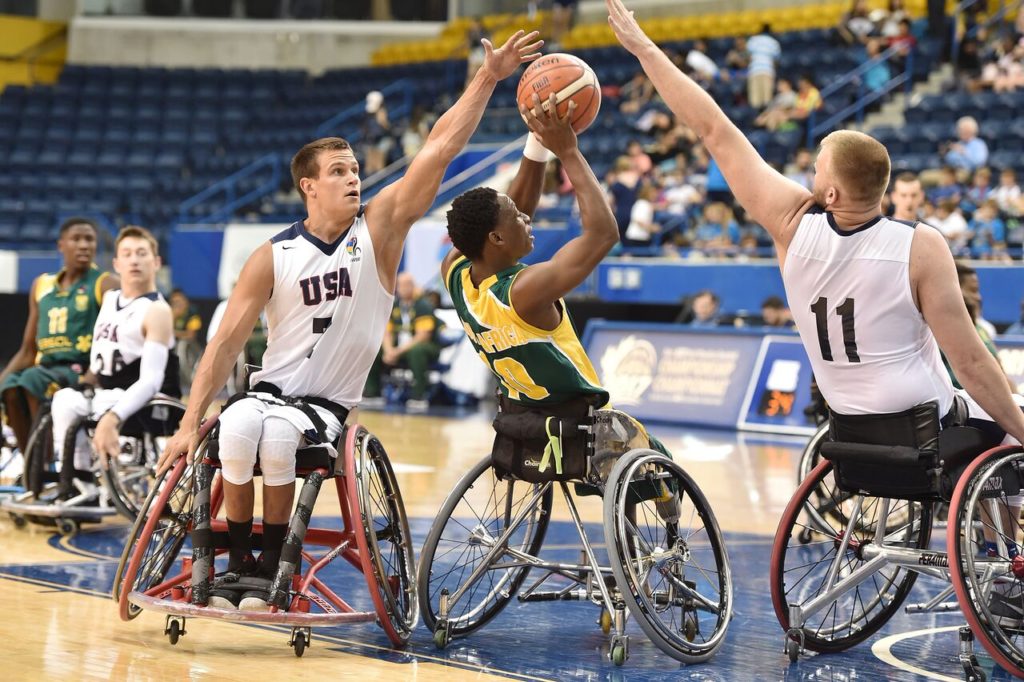 The United States managed to find their first win of the tournament with a 76-17 win against South Africa.

The United States raced to an early lead and maintained it throughout the game with South Africa unable to push past the solid American defense. 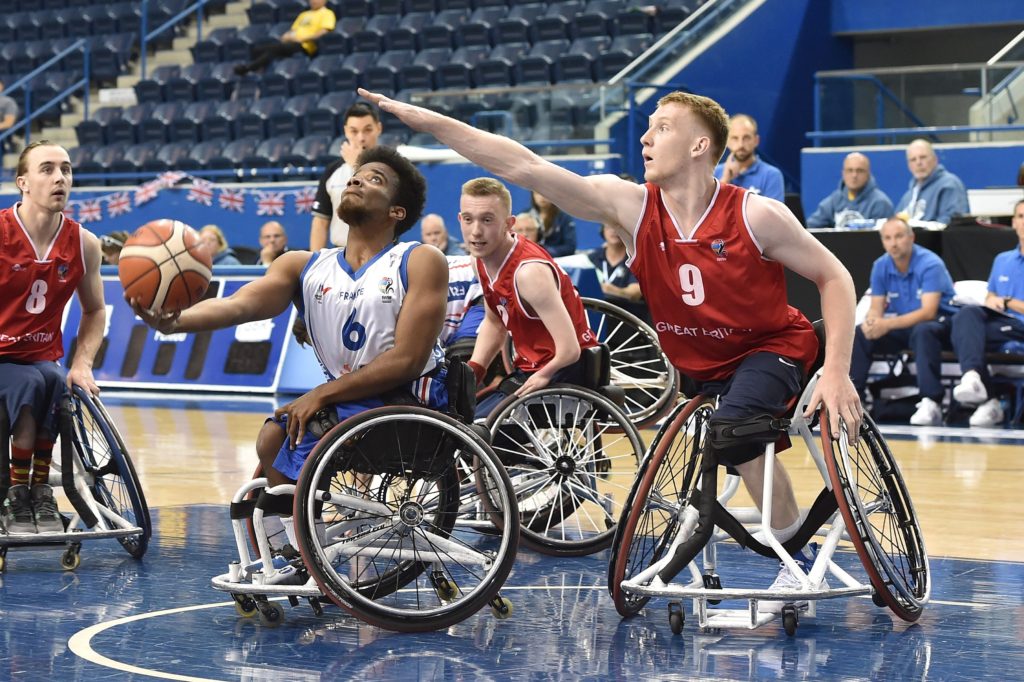 Great Britain secured the top spot in Pool B with a 60-41 win against France.

The British team came out with a strong offensive game, more than doubling the French output in the first quarter. France battled to match Great Britain’s fast pace and made a valiant push to close the gap by making it a five point game at half.

England stepped up their defensive game after half and completely surpassed France in the third period to secure their 19-point lead.

“I thought we did a very professional job, we knew it was going to be a tough game. France has kept everything in this group close, so we knew it was going to be tough,” said Ben Fox of Great Britain. “We expected it to be physical and guys just came out and performed unbelievably. It’s great, we’re top of the group, everyone’s buzzing. Confidence is high. But we know there’s four great teams in the other pool as well. So we’ve got a day’s rest tomorrow, regroup with the same energy, same attitude, same enthusiasm.” 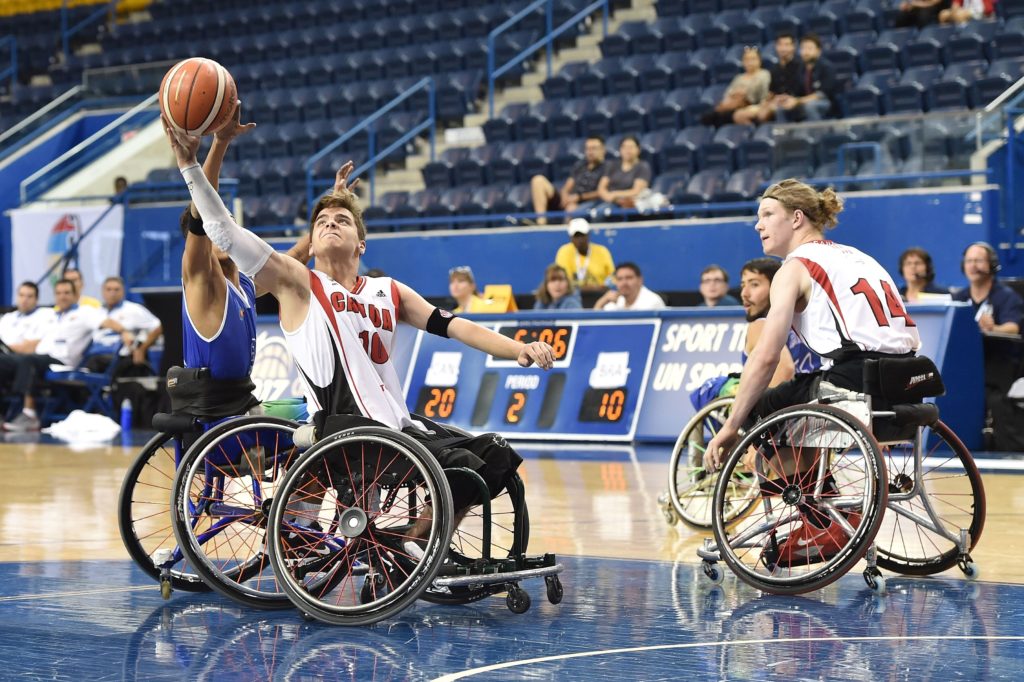 Canada improved their record to 3-2 in their final game of preliminary action at the 2017 Men’s U23 World Wheelchair Basketball Championship with a convincing 62-37 win against Brazil.

A slow start for the teams saw a low scoring first quarter, with Canada ahead by only four points going into the second. After finding some momentum with an eight point run led by Liam Hickey, the host team hit their offensive stride and left the Brazilians behind. Canada improved their shooting from their loss the day before, shooting 54 per cent.

Hickey discussed the game and what comes next for Canada, “I think it was kind of a slow start for us, we wanted better and I think that’s what we came out and did in the second half. We’re all happy that we finished strong and everyone played a great game. I think we’re just focused on the next game now so no matter who we’re up against we’re going to come at them hard. We’re going to forget about this one, take the positives and the negatives that we have to work on and go into the next one strong.”

Canada’s Hickey tallied the game-high 24 points with 11 rebounds to make it a double double. Ben Moronchuk also contributed a double double for Canada with 23 points and 10 rebounds. Anderson da Silva took the team-high 17 points for the Brazilian side.

With a 60-53 win against Australia, Turkey finishes pool play with a flawless 5-0 record and ends the fifth day of competition with a final barn burner.

Continuing the day’s trend, the game started out with teams exchanging baskets and keeping the score close throughout the majority. It wasn’t until the fourth quarter that Turkey’s defense managed to keep Australia from converting on their shots until there was 3:53 remaining on the clock. Australia battled back to make it a two point game but Turkey foiled their comeback to take the game.

The game’s top point producer was Tom O’Neill-Thorne with 25 points for Australia countered by Ahmet Efetürk with 20 points for Turkey.