Day One of the 2014 Women’s World Wheelchair Basketball Championship in Toronto, Ont.

British side outscores Brazil 56-37 to begin the tournament

Great Britain opened the 2014 Women’s World Wheelchair Basketball Championship with a 56-37 victory over Brazil. The tournament, hosted at the Mattamy Athletic Centre, is the largest women’s world championship in the history of the sport with 12 nations in competition.

Great Britain raced out to an early 16-6 lead through an efficient offensive push in the opening quarter. The second saw a resilient Brazilian squad respond with a 13-12 effort. The British side held a 28-19 halftime advantage on the strength of Amy Conroy’s 14 points.

Team Great Britain opened the second half in much the same way as it began the contest. A steady offence saw the team notch 16 points while its strong work on the defensive end held Team Brazil to eight. The European side capped the game with a 12-10 quarter to secure the victory.

Watford product Helen Freeman led the way with a game-high 20 points while corralling 11 rebounds and handing out eight assists. Conroy finished with 16 points on an efficient 8-of-10 shooting. Lia Martins and Perla Assuncão scored 10 points each to lead Brazil.

Great Britain will face a tough test on the second day of competition against No. 1 ranked Germany. Brazil will look to avenge its opening day defeat with a bout against the host nation at 3 p.m. (EST).

Game 2 – The Dutch Power Past Peru 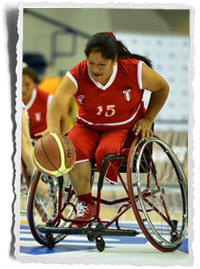 The Netherlands took on Peru to kick-off Pool A action at the 2014 Women’s World Wheelchair Basketball Championship. The Dutch – winners of the 2013 European Championship – took the match 89-5 in Peru’s international debut in a women’s world championship.

The Netherlands opened the game in convincing fashion by notching the match’s first 20 points before Peru found the scoreboard to close out the quarter. The European team continued its strong play in the second by shutting out the competition 19-0 to lead 39-2 at halftime.

A controlling effort on both ends of the court allowed the Netherlands to extend its lead after 30 minutes of play. The fluid Dutch offence scored 28 points as the team built a 67-4 advantage. The Netherlands closed out the game with a 22-1 performance in the final frame.

The balanced attack of Team Netherlands featured 11 different scorers with Mariska Beijer from the city of Den Helder leading the way with 18 points. Carina De Rooij added a double-double of 10 points and 11 rebounds for the winning side. Lima’s Pilar Jauregui – the Player of the Game – contributed four points and four rebounds for Peru.

After the game, Netherlands head coach Gertjan Van der Linden reflected positively on the match as a learning opportunity for his athletes. “It was good for us to get some experience on this court. All the players played and our youngest players who are new to this experience could play a lot of minutes.”

The Netherlands will look to continue its winning ways with a matchup against France on the second day of competition at 10 a.m. Peru will look to enter the win column against Australia when the two sides collide at 6 p.m.

Game 3 – Canada Opens With A Win On Home Soil

A lively home crowd with over 1500 elementary school students brought together by Wheelchair Basketball Canada’s Schools Program buoyed the spirit and play of Team Canada. The hosts raced out to a quick 8-2 lead en route to a 25-12 first quarter advantage. Japan responded well and took the second frame 18-17 to trail by 12 at halftime.

The Canadian side came together with a stifling defensive effort to limit Japan’s chances in the third. Heading into the final frame, Canada held a 61-41 advantage and showed no signs of slowing down. The home team’s timely offence outscored Japan 22-12 to complete the victory.

Team Canada was led by Vancouver, B.C. native Janet McLachlan who finished with game-highs in points (28) and rebounds (21). Cindy Ouellet of Quebec City, Quebec consistently found her teammates throughout the contest and collected 10 assists to accompany her 14 points. Mari Amimoto of Osaka led the Japanese side with a double-double of 18 points and 10 rebounds.

Katie Harnock – the Player of the Game with 25 points – spoke to the quality of the crowd when asked about playing on home soil. “It was such an amazing feeling. With that many home fans who were so excited; with the kids stomping their feet and singing, it was just amazing.” She went on to add, “That was a good win and a really positive result for us. You enjoy it for a little while, but then you need to refocus and get ready for the next game.”

The Canadians will look to improve their record to 2-0 against Brazil, who fell to Great Britain in its tournament opener. The game is scheduled to tip-off at 3 p.m. on the second day of competition. Japan next faces China tomorrow at 8 a.m.

The defending Paralympic champions got the 2014 Women’s World Wheelchair Basketball Championship started off right on Day 1, defeating China 59-45 in Pool B action.

After a slow start to the game that only saw three points scored through five minutes, Germany exploded at the end of the quarter to take a 20-11 lead after 10 minutes.

The Germans would continue their strong offensive and defensive play into the second quarter, but China would keep it close, thanks to the play of Jiameng Dai, who finished the game with a team-high 12 points.

Germany would start to break away in the third quarter, pushing their lead to 17. China would make a strong push in the final 10 minutes but it was not enough to knock off the Germans.

Leading Germany offensively was Marina Mohnen who had a game-high 19 points and four assists while Annika Zeyen had 17 points.

Zeyen was impressed with her team’s play but still feels they have some work to do when they play Great Britain on Saturday at 8 p.m.

“I mean, that was our first game and there’s a lot we can do better, especially on defence and play a lot harder and be on the chairs more,” Zeyen said. “We gave them too much space and then also offensively, we can move the ball a lot better.”

China will try and find the win column on Saturday when they play Japan at 8 a.m. 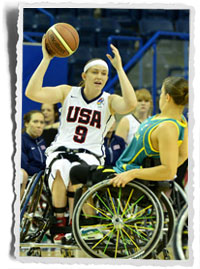 The USA provided the biggest upset of the day on Day 1 of competition at the 2014 Women’s World Wheelchair Basketball Championship, defeating London 2012 Paralympic silver medallist Australia, 68-52.

Rebecca Murray was dynamite for the Americans, tallying a game-high 30 points to lead her team. She says that beating a team with a higher ranking is a huge boost.

“It gives us confidence,” Murray, a native of Germantown, Wisconsin, said. “We knew Australia was higher than us so we were gonna have to bring our A game out there.”

The USA never lost the lead throughout the game, holding a 36-27 lead at half time.

In the fourth quarter, Australia got as close as eight points, but couldn’t manage to get anything further.

“Basketball is a game of runs so everybody is going to have their runs and we just had to, the next defensive stab was going to be the stab we had to make in order for that run to stop so that was our mind set,” Murray said.

Australia had three players in double digits but it was Amber Merritt that had a game high 14 points.

Australia will play Peru Saturday night at 6 p.m. while the USA takes on Mexico at 1 p.m. in Day 2 action.

France came out hard on Friday night in Day 1 of competition at the 2014 Women’s World Wheelchair Basketball Championship, defeating Mexico 61-42.

Right from first tip, France had the advantage and was led by Fabienne Saint Omer-Delepine’s 10 points after the first half of play. After 20 minutes, France had a 28-18 lead.

The Pool A opponents pulled close to each other in the second half but in the fourth quarter, France pulled away, posted a lead as big as 22 points.

Saint Omer-Delepine finished the game with a game-high 26 points and 11 rebounds while Mexico’s Floralia Estrada finished with a double-double of her own, posting 14 points and 10 rebounds.

France has a quick turnaround and will play the Netherlands at 10 a.m. on Saturday while Mexico will look to rebound against the USA at 1 p.m.