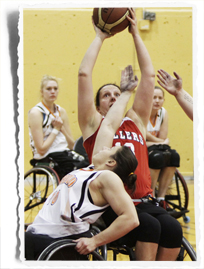 (Longueuil, Que.) The defending champions, Edmonton Inferno (2-0) is the only team to emerge undefeated in the opening day of competition at the 2016 Canadian Wheelchair Basketball League (CWBL) Women’s National Championship at Centre sportif Édouard-Montpetit in Longueuil, Que.

The Calgary Rollers opened the tournament with a 62-52 win against the BC Breakers. The Rollers picked up an early lead, only relinquishing it briefly in the second half when the Breakers came back to tie the game. Erica Gavel led the Rollers with 18 points, while Kady Dandeneau and Amanda Yan both scored 16 for the Breakers.

Team Quebec was unable to defeat Edmonton Inferno in the second contest of the day. The teams found themselves well matched as the Inferno couldn’t maintain a strong lead until the second half when the Edmonton players found their stride and outpaced Quebec to end with a 48-37 win. Arinn Young on Team Edmonton led all players with 18 points and Cindy Ouellet produced the most points for Team Quebec with 13 points.

The BC Breakers (1-1) secured themselves a win with a 59-17 decision over Team Ontario (0-2). Darda Sales led the Ontario players with 6 points while Kady Dandeneau and Amanda Yan once again scored the most points for BC with 19 points each.

The fourth game of the day featured an intense match between the two teams from Alberta. The Edmonton Inferno and Calgary Rollers (1-1) matched each other shot for shot, each team staying within one point from the other throughout most of the game. The game inevitably went into overtime after the teams found themselves tied 60-60 at the end of the fourth quarter. The Rollers were unable to keep up the pace against the Inferno and the game ended at 76-69 for Edmonton Inferno. Arinn Young from the Inferno tallied a game-high 34 points and Erica Gavel was the top point producer for the Rollers with 27 points.

Quebec (1-1) concluded the day with their first win of the tournament with a 56-42 win against Ontario (0-2). Ontario player Tamara Steeves wowed the crowd when she scored four times in a row from behind the arch and finished the streak with an additional two points. Overall Steeves scored 23 points for Ontario and Maude Jacques led Team Quebec with 21 points.

Round robin action resumes Saturday as the Edmonton Inferno take on Ontario at 9 a.m. ET, as teams angle for position to determine which clubs advance to the medal games on Sunday.