(Toronto, Ont.) The leading teams in each pool faced off against each other on day four of tournament play today in the ‘battle of the undefeated.’ The Netherlands beat out the United States to capture the top position in Pool A, and Germany claimed a hard-fought victory against Canada for the lead in Pool B, pulling away after a back and forth first half.

France opened the fourth day of competition at the 2014 Women’s World Wheelchair Basketball Championship with a 68-15 victory against Peru. The win ensures France a top-four spot in Pool A and a place in Thursday’s quarter-final match-ups.

Peru’s first foray into international competition has seen its players face some of the strongest squads and players in the world. While the team’s tournament has not yielded results in the standings, one cannot argue the value of the experience gained by the South American nation.

Lima’s Pilar Juaregui’s three-pointer in the final moments of the first quarter cut France’s lead to 21-5. A concerted defensive effort by Peru held France to 13 points in the second to bring the score to 34-11 at halftime. The French side’s offence found its footing in the third to stretch its lead to 53-13. 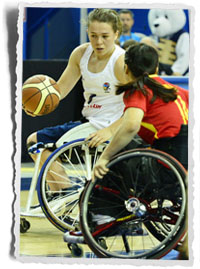 The second match on day four of the 2014 Women’s World Wheelchair Basketball Championship saw Great Britain improve to 3-1 with a 64-47 victory over China.

Great Britain’s Helen Freeman just managed to beat the clock to knot the match at 15-all to end the opening frame. With Yong Qing Fu – who has been one of China’s most effective players on both ends of the court – limited in the second with foul trouble, the British side was able to push ahead 31-25 at the half.

China’s Fu fouled-out early in the third and Great Britain was able to take advantage of her absence. The British offence found its openings and the team’s defence held firm to put the game out of reach and build a 21-point advantage after 30 minutes.

Freeman noted the team’s preparation and depth when asked about the victory. “It was really good to start putting in some of the things that we’ve been working on in practice and seeing the results. [This team] really is 12 deep. Everyone’s ready to play whenever they’re needed and everyone’s ready to play at this level.”

Great Britain will conclude pool play with tomorrow’s 6 p.m. match against the host nation. China will look for its second tournament win against Brazil at 3 p.m.

Amimoto leads her team past Brazil 63-52

Japan held off Brazil 63-52 for its first victory of the 2014 Women’s World Wheelchair Basketball Championship. The Japanese side now holds a 1-3 record in Pool B play.

Following an even start, Team Japan locked down the Brazilian offence in the frame’s final four minutes while scoring six straight to build an 18-11 lead. A determined Team Brazil fought back in the second to trim its deficit to just three, but Japan fended-off the advance to stretch its lead back to seven to end the half.

After being ahead 31-24 at the break, Japan opened a double-digit cushion late in the period, but Brazil answered with a string of six straight between the third and fourth to creep back within single digits. As they’ve done throughout the tournament, the Japanese relied upon its leading scorer Mari Amimoto to distance itself from the opposition and capture the win.

Osaka native Amimoto led her side with a tournament-high 37 points – including 21 in the first half alone – to go with nine rebounds and six assists. This was the versatile player’s third consecutive game of at least 20, seven and six. Vileide Brito de Almeida responded for Brazil with 12 points and six rebounds.

When asked about her side’s victory, head coach Kaori Tachibana noted, “I was satisfied with our athletes’ performance. Brazil’s players are fast and big and they shoot well. We needed to play good defence and make them take tough shots.”

Team Japan will wrap-up preliminary pool play tomorrow against Germany (3-0) at 1 p.m. Brazil will face China at 3 p.m. in search of its first win of the competition. 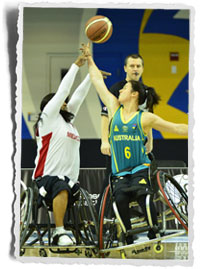 After a Day 1 loss, Australia has regrouped to win their last three games, including their latest, a Day 4 60-30 victory over Mexico.

Unlike against France on Sunday, Australia started out strong with a 10-2 run to start the game before taking a 21-2 lead after 10 minutes.

A balanced second half attack, including 35 points off the bench contributed to Australia’s success the rest of the way.

For Australia’s head coach Tom Kyle, he doesn’t feel as though his team has had to change much since losing to the USA on the World Championships opening day.

“Well, I don’t think there has been any difference,” Kyle said. “We’re still not hitting our straps, we’re still not playing as well as we can play, I think it is just a matter of getting in a rhythm and at the moment, we’re still not quite finding that, we will, the girls are upbeat, they’re strong, they just need to play some more tough games and they’ll be fine on the day.”

Australia has a tough test to finish the round robin on Day 5 with a 8 p.m. matchup against the Netherlands.

Mexico will search for their first win with a game against Peru at 8 a.m.

Game 23: Early and Often for the Netherlands in Win

Right from the opening tip the Netherlands got ahead and never gave up the lead en route to a 76-54 victory over the USA on Monday night.

The Day 4 matchup saw the Netherlands jump out to a 25-11 lead after the first quarter only to see that lead get cut a few minutes later.

The USA went on an 8-4 run to start the second to cut the deficit to 10. The Netherlands would continue to to push and Jitske Visser would make a big shot at the buzzer to put her team up by 12 at half time.

The second half would see the Netherlands continue to extend that lead and work the Americans down low, scoring 42 of their points from in the paint.

Roos Oosterbaan was named the Netherland’s player of the game shooting 63 per cent from the field and posting 10 points in just under 30 minutes of play. Mariska Beijer had a game-high 23 points to lead the Netherland’s scoring.

After the game it was Oosterbaan who commented on what it took to defeat their opponent.

“We watched their game and they’re a very strong team and we stayed really focused on how to defend and I think that worked out,” Oosterbaan said.

Outscores the Canadians 33-19 in the final two quarters

No. 1 ranked Germany rode a strong second half to defeat No. 6 Canada 64-53 at the Mattamy Athletic Centre on Monday night.

The Canadians led for most of the first half, taking a 34-31 lead into the second, but couldn’t come away with the win against the reigning Paralympic champions. Germany was keyed by the scoring of Marina Mohnen and Gesche Schuenemann, who netted 29 and 28 points respectively.

German head coach Holger Glinicki pointed to his team’s performance throughout the entire game for the win.

“Canada is a good team, and we are too. They played well in the first half and so it was very close, but we have to play forty minutes and after forty I think we are the better team,” he said.

With the win, Germany remains atop Pool B with a 4-0 record, while Canada slips into a tie for second in the pool at 3-1.

The two teams battled in a back-and-forth first quarter. Canada had a six point lead in the dying seconds of the frame, until Schuenemann nailed a deep three-pointer with a few ticks left on the clock, cutting the lead to 21-18 after one.

The second was just as tight, but the torrid scoring pace cooled a bit for both teams. Neither squad could pull away, as they traded stops throughout the frame. Both teams scored 13 in the quarter, as Canada took a three point lead into the locker room.

In the second half, Germany made their push.

Fuelled by a strong full-court press that forced 13 Canadian turnovers, team Germany made a run late in the third quarter, and never looked back, eventually pulling away to a 15-point lead in the fourth. Canada managed to cut the lead to 10 late in the fourth, but it was too little, too late.

Germany next takes on Japan at 1 p.m. on Tuesday, while Canada faces Great Britain at 6 p.m., with second place in the pool on the line.