Germany, the Netherlands, Canada and the United States Advance to the Semifinals at the 2014 Women’s World Wheelchair Basketball Championship

(Toronto, Ont.) Eight teams played it out for a chance at the semifinals and a medal during Thursday’s quarter-final play. Germany reigned victorious over France and will play in the semi finals against the United States, who defeated Great Britain Thursday. Hosts Team Canada beat out the Australian Gliders and will take on the undefeated Netherlands on Friday for a chance at the gold medal game.

Game 31: Brazil Dominates Peru in a Last-place Battle, Taking it 88-8

In the fight between two winless teams, it was Brazil who prevailed successful with an 88-8 victory as they took their first win and eleventh place in the Women’s World Championship.

The early morning match saw Brazil’s squad go on a 48 point run, with Peru ending the point streak with 4:30 left in the third quarter. By the same time in the fourth quarter, Brazil had left no hope for a comeback, leading by a commanding 70 points. However, the Peruvians continued to battle back, showing no mercy and continuously attempting to fight off the Brazilian offence.

To the surprise of none, Brazil’s Perla Assuncao took home the Quickie Player of the Game with an incredible performance. Assuncao tapped off the team’s domination with a total of 20 points, 10 assists and 6 rebounds. Jessica Santana was also stellar for team Brazil, adding 26 points and 9 rebounds to the score sheet. Another great performance was seen by Vileide Almeida, supplying 22 points to the game’s total score. The Brazilian trio combined for 68 points of the 88 total.

An outstanding effort put on from Peru’s Pilar Jauregui saw a game high of 10 rebounds as well as supplying the team’s only assist.

Both will look optimistically towards the future as they are eligible to return to Toronto next August in hopes to participate in the Toronto 2015 Pan American Games. The teams will certainly return home with much to work on for what could be an extremely successful tournament next year, and perhaps help qualify themselves for the 2016 Paralympic Games in Rio De Janeiro.

Japan wrapped up Thursday morning’s consolation game with a 68-40 win over Mexico. The two teams battled it out, going point for point in the first half of the match, leaving for the halftime break with a mere six-point Japanese lead.

Japan’s team dominated the second half of the game scoring a total of 36 points while Mexico struggled to put up 14. The Mexicans faced the high-scoring Japanese with strong defensive tactics but it just was not enough to shut down the Japanese powerhouse.

Mari Amimoto topped the Japanese stat charts with a team high triple double of 26 points, 10 rebounds, 10 assists and 4 steals on the game. The Quickie player of the game was awarded to Japan’s number 10, Mayo Hagino who’s tremendous effort did not go unnoticed. Hagino added 10 points to the win and shot an incredible five for seven field goal record, equaling to a 71 per cent field goal percentage.

Mexican point leader Lucia Vazquez bettered the final result by adding 17 points and 8 rebounds in the match. Mexico’s MVP was easily Floralia Estrada, who logged another 17 points on the game. Estrada was exceptionally crucial in the defensive department with four assists, six steals and the only Mexican block on the match.

The game closes out both Mexico and Japan’s journey in the WWWBC tournament. Both teams had a noticeable progression of improvement from their first match until the last. Mexico is eligible to return to Toronto to compete at the 2015 Parapan games next August. 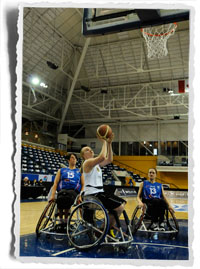 A monster first quarter was the difference on Thursday afternoon at the Mattamy Athletic Centre as Germany defeated France 70-25 to advance to the semifinals of the 2014 Women’s World Wheelchair Basketball Championship.

The Germans opened the game on a 23-1 run and that’s how the score stood after 10 minutes.

The slow start from France was a surprise to Germany’s Marina Mohnen, who had a game-high 18 points on the afternoon.

“We actually, we expected them to be a bit stronger today,” Mohnen said. “It was a surprise that we were leading by 20 points after five minutes.”

France would start to rally near the end of the first half but still trailed by 29 come recess.

Germany will now face the winner of Great Britain versus the USA in Friday’s semifinals while France will play the loser of that game in the classification games also on Friday.

Regardless of the opponent, Mohnen says her team will be ready to play.

“It will be a different game than it was today because both teams are very tough defenders, they play tough defence, they will probably press us and so we have to be ready for tomorrow.”

Game 34: Netherlands Through To Semis

Dutch advance with a 62-52 win over China 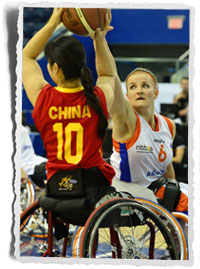 The Netherlands punched its ticket into the semifinals of the 2014 Women’s World Wheelchair Basketball Championship with a 62-52 victory over China. The Dutch side remains undefeated in this competition at 6-0.

The Netherlands looked poised to register another big opening quarter after starting 12-4, but a late run drew the Chinese within three at 15-12 to end the period. The Dutch found its footing in the second to extend its lead to 12 at the midway point of the match.

Team China edged past the Netherlands 14-12 to take the third frame, but still trailed 48-38. The Netherlands’s ability to force turnovers and its work on the offensive glass proved to be the difference in this match. The Dutch gained four more points off turnovers and held a plus-six advantage in second-chance points.

The Dutch attack featured Quickie Player of the Game Inge Huitzing, who topped all scorers with 28 points, eight rebounds and eight assists. Mariska Beijer added 20 points and nine rebounds for the winning side. Yong Qing Fu answered for Team China with a double-double of 24 points and 11 rebounds. Teammate Jia Meng Dai contributed 22 and 10.

The Netherlands will play in Friday evening’s semifinal match-up against the winner of the quarter-final game between Canada and Australia. The loser will face China in the consolation round.

Game 35: Big Second Half Sends Canada Through to Semis

The Canadians notch a 63-47 win over Australia to advance

Team Canada powered past Australia 63-47 to earn a spot in the semifinals of the 2014 Women’s World Wheelchair Basketball Championship.

Team Australia erased an early 7-2 run by Canada to come back and lead 9-8, but the Red and White responded to control the contest at 19-14 to end the period. The back-and-forth action continued in the second with Australia knotting the match at 27 before Canada regained its composure to go ahead 33-29 at halftime.

Australia trimmed the Canadian advantage to two points early in the third, but Team Canada responded with an 18-4 streak to distance itself 53-37 after 30 minutes of play. The Canadians earned the victory on the strength of some steady work in the paint, outscoring the competition 48-14 down low.

A three-pronged Canadian attack was led by Quebec City, Que. native Cindy Ouellet who notched 20 points and seven assists in the contest. Janet McLachlan of Vancouver, B.C. collected a double-double of 17 points and 15 rebounds, while Elmira, Ont. product Katie Harnock also added 17 points for the home side. Sydney’s Sarah Stewart countered with a team-high 12 points for Australia.

Canada’s head coach Bill Johnson credited the team’s defensive pressure and depth when asked about the victory. “We were able to force them to take some outside shots tonight. We’re fortunate to have a few players who can score. In the past, we’ve had one or two, so that depth will be important moving forward.”

The Canadians’ semifinal match tomorrow will come against an undefeated squad in Team Netherlands. Australia will meet China in the consolation round.

The last quarter-final match-up saw Team USA defeat Great Britain 53-41 to advance to the semifinals of the 2014 Women’s World Wheelchair Basketball Championship. The Americans (5-1) join Germany (6-0), the Netherlands (6-0) and Canada (5-1) as the tournament’s semifinalists.

Team USA tallied 13 points in the opening quarter while limiting the British offence to eight. Another close period saw the American side outscore the opposition by four to take a 27-18 lead at the game’s midway point.

A determined Great Britain came out of the break focused and drew within three points of Team USA, but a late 7-2 push restored an eight-point advantage for the Americans. The final frame played out in similar fashion with Team USA once again narrowly edging-out Great Britain.

Gaeng – the Player of the Game – reflected on the match by saying, “It was a great team win. We stuck to the game plan the coaches gave us and we were happy with the result. We’re 12 deep, our coaches always tell us that if we play together, there’s nothing that we can’t do.”

Team USA will take-on Germany in semifinal action tomorrow evening at 8 p.m. Great Britain will match-up against the French in the consolation round at 1 p.m.