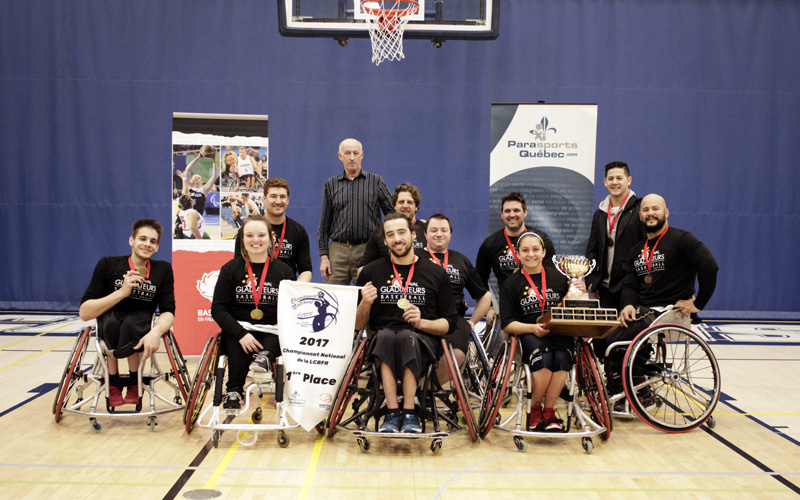 The win marked Laval’s return to the top of the podium since their previous championship title in 2013.

“I really like the fact that we’ve got some new players on the team and every year it seems like the core is there but we’ve always had new additions and it’s a different lineup than the last time we won. It’s really great to be able to bring different players and be able to win this as a club team,” said Gladiateurs player and Paralympian David Eng.

The Gladiateurs de Laval finished the tournament with a dominating performance against the BC Royals. Laval captured the lead early on in the first quarter due to some precision shooting, however the Royals were not going to relinquish their winning streak without a fight. Demonstrating the skill and teamwork that brought them to the gold medal match, BC maintained a press against the Laval team and rebounded in the second quarter to trail by only four points at the end of the first half.

The second half opened with a basket from BC which shrunk the deficit to two points. Laval was quick to shut down BC’s attempt to close the gap by going on a six-point run then increasing their lead to 10 points. Deion Green of the Royals responded by dialing it up from long distance and sinking a pair of threes to once again make it a four-point game going into the fourth quarter. BC never let up in their offense but ultimately wasn’t able to match Laval’s unrelenting press.

Green showed off his range by draining a total of four three-pointers as part of his 16-point effort, while Bo Hedges claimed the team-high 21 points for the BC Royals. David Eng led the Laval team with a tournament-high 30 points and 17 rebounds.

“We did well, BC played a really great game and they were on us the whole time and they kept grinding the whole time. I think it’s just a matter of us being a little bit more experienced and a little bit more composed near the end and because we’ve been together for so long,” said Eng. “BC is a great team and I think if the team keeps going that in a few years it will be back to the past BC-Quebec rivalry like it was back in the day. It was a really fun game to be a part of.”

The penultimate game of the tournament began with both teams setting a vigorous tempo, exchanging leads in a back and forth battle throughout the first quarter. Alberta went into the second with just a one-point lead but managed to build on their momentum and convert on their offensive opportunities to go up by 12 points going into the half. Variety Village battled to close the gap but Alberta always seemed to have the answer.

Even with a strong offensive charge led by Variety Village’s Jesse McNalley and Jamoi Anderson, who scored 25 and 20 points, respectively, they were never able to come within more than seven points of Alberta’s lead. Adam Reid claimed the team-high 22 points for Alberta, however it was a strong team effort which saw Ben Moronchuk tally 21 points and Braden Doll secure a double-double with 16 points and 15 rebounds. Not to be outdone, Variety Village’s McNalley also finished his tournament with a double-double with 16 rebounds.

“We learned a lot throughout this whole tournament and we put together a really complete game today. We pushed the pace and slowed it down when we needed to and we didn’t let it get out of control at any point, I felt like we were in control the whole game. I’m pretty proud of the whole team and what we accomplished,” said Moronchuk.

Bo Hedges of the BC Royals was named the tournament’s most valuable player. Adam Reid and Ben Moronchuk of the Alberta Northern Lights, Ryan Tonn of the Calgary Grizzlies, Philippe Vermette of the Gladiateurs de Laval, and Jesse McNalley of Variety Village were named to the all-star team.

The tournament was hosted by Parasports Quebec.