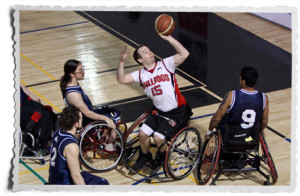 (Scarborough, Ont.) Provincial rivals the Bulldogs de Quebec and the Gladiateurs de Laval will battle for the gold medal at the 2015 Canadian Wheelchair Basketball League (CWBL) National Championship at the Toronto Pan Am Sports Centre in Scarborough, Ont. The Variety Village Rebels and the National Academy team will face off in the bronze medal game.

The defending champion Bulldogs and the Gladiateurs will meet in the championship final and decide the national club title for the third consecutive year.

“The Bulldogs are a team we know very well. We play them five or six times per year and this is the third year in a row we’ll play them in the final, so we know that we have to play a very good game tomorrow in order to be on top,” said Laval player and coach Marc-Antoine Ducharme. “We are very excited to be in the final again,” he added.

The bronze medal contest is set for 9 a.m. ET on Sunday, followed by the championship match at 11 a.m. ET. Both games will be webcast live via SportsCanada.tv.

Variety Village stretched its winning streak to three games with a 67-48 triumph over the Alberta Northern Lights to open the second day of the tournament. The contest proved tight through the opening half before the Rebels broke out in the third quarter to take command. Adam Lancia posted 23 points for Variety Village. Bradon Doll was solid for Alberta with 23 points, while teammate Arinn Young provided the secondary scoring with 15 points.

The Bulldogs set the tone early, racing to a 21-9 advantage in the opening 10 minutes of the game. CIVA struggled to keep pace with the torrid Bulldogs attack, as Quebec continued to convert on the offensive opportunities en route to the decisive win. Maxime Poulin delivered a massive 32-point effort for the Bulldogs. Brothers Benjamin and Nicolas Palmer each registered 13 points for CIVA.

The Gladiateurs de Laval earned a berth to the championship game courtesy of a 72-65 win against the National Academy club team. Laval dominated the scoreboard in the two middle frames before a late comeback push by the Academy in the final quarter ultimately fell short. Team Canada veteran David Eng led the charge with 30 points, including a trio of three-pointers, for the Gladiateurs. Fellow national team player Bo Hedges tallied 21 points for the Academy side, with teammate Mitch Bossaer dropping 20 points.

The B.C. Royals finished third in pool B after edging the Burlington Vipers 63-38. The Royals established their reign on the scoreboard by outscoring the Vipers 22-10 to start the game and never looked back. The Vipers placed fourth in the pool with the loss. Avril Harris produced a team-high 22 points for the Royals, while Vipers player Aaron Moseley-Williams matched that output with 32 points for Burlington.

The Bulldogs de Quebec punched their ticket to the gold medal game and locked up first place in pool A by ousting the Variety Village Rebels 66-52 in the afternoon. The hotly contested match started as a back-and-forth battle before Quebec widened the gap in the second quarter to take a 35-25 lead at halftime. The Rebels pushed to erase the deficit but Quebec matched their intensity down the stretch. Maxime and Mickael Poulin each produced 22 points for the Bulldogs. Adam Lancia scored 19 points for Variety Village.

“It was a crucial matchup and it’s too bad that we just weren’t able to execute our game plan 100 per cent. In the second quarter in particular it resulted in Quebec getting some really easy layups. When you give a good team like that easy layups they aren’t going to miss too many. Unfortunately we weren’t able to come down the other way and generate the same type of easy baskets. Our shooting percentage at the end of the game and the score reflect that. That’s why tomorrow we absolutely have to execute the entire game plan in order to be successful and get the bronze,” said Variety Village player Adam Lancia.

“Both games tomorrow are going to very close and I wouldn’t be willing to lose any money betting on either the outcomes,” he added.

The Northern Lights overpowered the Southern Ontario Suns 68-40. With the loss the Suns placed fifth in pool A and concluded the tournament in ninth place. Backed by the strength of a 22-6 run in the second quarter, Alberta used its depth to secure the win as each player factored in on the scoreboard. Bradon Doll was the top point producer for the Lights with 18 points, while Ben Moronchuk added 16 points for the Alberta side. Kevin Wakeling led the Suns with 14 points.

The Alberta Northern Lights and B.C. Royals contested an intense game to decide fifth place, with the Royals coming out on top 61-53. The opening half of the match was a seesaw battle that resulted in a 28-26 edge in favour of the Royals. Ross MacDonald drove the offence for the Royals with 21 points, while Ben Moronchuk had 17 points for the Lights.

CIVA de Montreal captured seventh place with a 56-33 victory against the Burlington Vipers. Benjamin Palmer led the Montreal club with a team-best 24 points, while Aaron Moseley-Williams collected 17 points for the eighth place Vipers.