Quarter-final Matches Set for Thursday After End of Preliminary Play 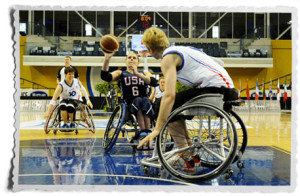 For the first time at the 2014 Women’s World Wheelchair Basketball Championship, Team Mexico’s players raised their hands in victory. The team completed preliminary pool play with a 1-4 record after a 63-24 win over Peru. This tournament marked the first time the Peruvian side has taken part in a major international competition.

Peru made history in the opening minute of play by taking a lead for the first time ever at this level of play. The two sides began with a back-and-forth quarter before Mexico rattled-off six straight to pull ahead 15-10 to end the frame.

The Mexican offence came alive and fired-off 26 points in the second to put the game out of reach. Team Peru regained its composure in the second half to limit Mexico’s chances, but the deficit proved too large to overcome.

Despite a string of tough opponents, Peru can pride itself on consistent game-by-game growth. The team has increased its scoring output in each contest and has gained invaluable experience on the international stage.

Floralia Estrada of Guadalajara led Team Mexico with her second double-double of the tournament, notching 27 points to accompany 11 rebounds. Marleni Tunqui answered for Peru with 10 points and three steals.

Mexico will play for ninth place on Thursday morning at 10 a.m. against the fifth-place finisher of Pool B. Peru will challenge for 11th-place at 8 a.m.

Defence earns the Americans a 74-35 victory against France

Team USA will take a 4-1 record to the crossover stage of the 2014 Women’s World Wheelchair Basketball Championship after a thorough 74-35 victory over France. The setback sends the French to 2-3 – good for fourth-place in pool B and a spot in the quarter-finals.

Rebecca Murray’s 17 points in the opening frame quickly put the United States ahead of France by a score of 23-7. The USA again held the French to single digits in a 14-8 second to build a 22-point lead at halftime.

A triple from Angélique Pichon in the third’s final seconds pushed France’s total to 11 in the frame, but Team USA registered 19 to lead 56-26. The American side’s strong defensive presence throughout the game limited France to 16 field goals on 27 per cent shooting.

Murray of Germantown, Wis. tallied 25 points for Team USA to lead all scorers. Teammate Desiree Miller added 20 points and eight rebounds to earn Player of the Game honours. Pichon, a native of Plouenan, recorded a team-high 19 points for France.

After the game, USA head coach Stephanie Wheeler commented that, “[The team’s] challenge was to come out, execute a game plan, and stay mentally focused and I think they did a fantastic job of that. I’m really happy with the way they finished. I think it’s going to put [the coaches] in a position to really take that next step and challenge them even more going into the quarter-finals.”

Both teams will compete in Thursday’s quarter-finals. 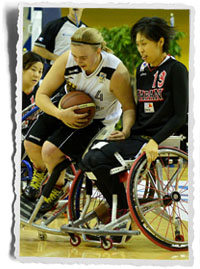 Germany has secured the top spot in Pool B with an 82-49 victory over Japan at the 2014 Women’s World Wheelchair Basketball Championship. The Japanese finish preliminary pool play in fifth place.

Team Germany opened with a strong shooting display, making nine of its first 12 shots to lead 19-12 after 10 minutes of play. A close second saw Germany extend its lead to 10 at 36-26. In the first half, the Europeans dominated inside play with 16 points in the paint to Japan’s four.

After the break, Team Germany continued to shoot the ball accurately while its defence held the Japanese side in-check, allowing only nine points in the frame. Germany’s slick ball movement resulted in 30 assists in the game, while the team made 62 per cent of its field goal attempts.

China takes their second win of the tournament over Brazil, scoring 75-44 to give them a 2-3 record at the end of the preliminary play. The win allowed the Chinese to successfully secure a spot in the quarter-finals competition which begins Thursday, June 26. Despite facing an uphill battle for most of the game, the Brazilians refused to give China any help defensively and continued to drive to the basket even in the dying seconds of the match.

Brazil began the game strong, but China gained the upper hand of momentum after going on a 10-point run in the opening quarter. Despite holding the ball well and often, Brazil ran into some offensive trouble, conceding a total of six shot clock violations in the match. Brazilian coach Tiago Costa Baptista utilized his timeouts effectively during the game, devising a plan with the help of his players on the bench counting down the seconds on the shot clock for their teammates on the court.

After fouling out in yesterday’s match against Great Britain, Yong Qing Fu bounced back as China’s secret weapon of the game. Fu was nearly unstoppable, putting up 34 out of their 75 points in just 22 minutes of game-time. However, it was China’s Yun Long who was a key team player, supplying ten assists and five rebounds, as well as winning the Quickie player of the game.

Brazil’s Vileide Almeida did not let up on the Chinese defensive squad, hitting seven out of her fifteen shots and putting up 17 points in the process. In the end, Brazil was unable to thump their opponents, finishing with a winless record of 0-5.

Brazil will play Thursday against Peru for 11th place while China will advance to the quarter-finals.

Fought off a strong push by Great Britain in fourth quarter

Canada had a big fourth quarter, scoring 19 points and defeating Great Britain 59-52 to close out their round robin play at the 2014 Women’s World Wheelchair Basketball Championship.

The Day 5 action at the Mattamy Athletic Centre was a close matchup throughout, featuring six lead changes. A strong charge by Great Britain at the end of the second quarter gave them a 26-25 going into the half.

The third quarter would be very much the same as the first half, with Great Britain controlling the tempo for the better part of the quarter. Part of how Great Britain was able to be so successful was with their rebounding, collecting seven offensive rebounds after three quarters and finishing the game with 10.

“Definitely something we want to improve on,” Canada’s head coach Bill Johnson said after the game about giving up so many offensive rebounds. “We struggled a bit with that in the game against China as well so it is something we’re focused on and will be addressing for sure.”

After three quarters, the two teams were tied at 40.

Canada would come out flying in the final stanza, going on a 9-4 run to start. The Canadians would find a way to counter the Great Britain’s aggressive defence and was able to play some good defence of their own to secure the win.

The win secures Canada a place in Thursday’s quarterfinal finishing the round robin with a 4-1 record. Great Britain will also be in the quarterfinals and finished their preliminary round with a 3-2 record.

Game 30: Second Half the Key in the Netherlands Win Over Australia

Outscored their opponents 22-11 in the 2nd half.

The Netherland’s finished the preliminary round of the 2014 Women’s World Wheelchair Basketball Championship undefeated with a come from behind 47-38 victory over Australia on Tuesday night (24 June) at the Mattamy Athletic Centre in Toronto, Canada.

Australia carried all the momentum in the early going, and held a 16-12 lead at the end of 10 minutes. The Netherland’s wouldn’t go away, going on a 8-4 run to start the second frame and tying the game. Australia would eventually have the last chance before the end of the first half, going ahead 27-25.

The second half would be a much different story as the Netherlands came on strong at the end of the third quarter and padded their lead even more in the fourth to capture their fifth win of the tournament.

The Netherlands head coach Gertjan Van der Linden says that a simple message was relayed to his team at the conclusion of 20 minutes.

The thing was be calm and play your own game and so then it will be our turn,” Van der Linden said. “To read the game and play our own game as we’ve practiced and then we are good enough to beat Australia.”

Inge Huitzing was strong all game long for the Netherlands posting 19 points and six assists in 40 minutes of play.

Sarah Stewart was the leading scorer for Australia with 10 points on the evening.

Both teams will advance to Thursday’s quarterfinals.