(Edmonton, Alta.) Team Canada wheelchair basketball alumnus Ron Minor was inducted into the Edmonton Sports Hall of Fame on Monday to a loud round of applause from a packed room at the Winspear Centre in Edmonton.

The 61-year old represented both Edmonton and Canada at the highest level of wheelchair sport, competing in a total of 10 different events over his five trips to the Paralympics in athletics and wheelchair basketball.

On the hardcourt, Minor competed at the Paralympics in 1988 and 1992 and made three appearances at the world wheelchair basketball championships in 1979, 1986 and 1990. He captured silver and bronze medals at the world championships as part of Team Canada. 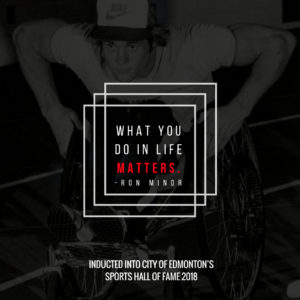 Minor’s parents taught him a valuable lesson growing up: to never give up. As a child, they instilled in him that if you’re going to do something, do it as hard as you can and as best as you can.

Since his retirement, Minor has become an important mentor and coach for countless athletes through his work with the Alberta Northern Lights (ANL) Wheelchair Basketball Society—a group that he was a founding member of in 1976.

“It is an honour and a privilege for us when (Ron) share(s) (his) knowledge and experience with us at the gym each week,” said the ANL in a Facebook post. “The Alberta Northern Lights would not be where we are today without (him)!”

For Minor, the City of Edmonton and community mean a lot to him.

“If you want to have a sense of community then that means you have to share with others and that’s what I try to do,” he said.

Years later, Ron’s work and legacy continue to inspire athletes in his community as they pursue their athletic dreams.

Ron told the crowd at the induction ceremony: “Winning a race does not compare to life. What you do in life matters.”

Congratulations Ron on this incredible achievement!