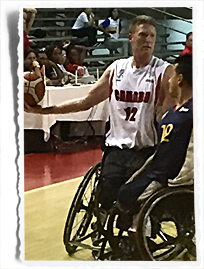 (Cali, Colombia) With an 80-53 quarter-final victory over host Colombia, Canada secured their place as one of the top four teams in the 2017 Americas Cup which earns them a spot to compete in the 2018 World Championships in Hamburg, Germany.

“It feels great to get the win here against the host team and accomplish our goal of qualifying for the world championships in Germany,” said Canada’s Jonathan Vermette. “The tournament isn’t over yet and we’re going to focus on the next game against Brazil in the semifinals but it’s great to know that we’re qualified and I’m proud of how we’ve been playing so far.”

Undefeated coming out of the round robin stage in the Americas Cup, the Canadians pushed hard to claim the quarter-final win to advance to the semifinals where they will play Brazil on Tuesday, August 29 at 6pm ET.

Canadians Pat Anderson (Fergus, Ont.) and Nik Goncin (Regina, Sask.) opened the game against Colombia with an unrelenting offensive push in which the two were responsible for sinking 42 of Canada’s 46 points going into half.

With a well established 25-point lead moving into the second frame the stalwart Canadian defense kept Colombia from closing the gap by keeping consistent pressure on their attacks and forcing them away from the paint.