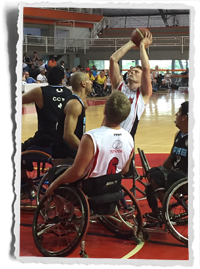 (Cali, Colombia) The Canadian Women’s National Wheelchair Basketball Team will collide with the United States in a battle for first place at the 2017 Americas Cup after finishing the preliminary round undefeated. The Canadian Men’s National Team also completed pool play on Sunday afternoon with a 68-49 win against the Argentinian men to ensure their spot at the top of Group A. Canada will play Colombia in the quarter-final with a berth to the world championship on the line on Monday, August 28 at 8 p.m. ET.

With their final preliminary win against Argentina, the Canadian women solidified their place at the top of the group and will fight for the gold medal at the tournament on Tuesday, August 29 at 8 p.m. ET.

The 69-32 win against Argentina came after another dominant Canadian performance where the women were determined to maintain their perfect record in the tournament. Canada carved out an early lead by nearly doubling the Argentinian output, 19-10, by the end of the first quarter. Canada never allowed Argentina the chance to retaliate and kept firm control of the game, entering halftime with a 38-18 advantage and eventually cruising to the win with a solid 37-point lead.

“I think we started off a little bit slow but we managed to pick it up. It was a really great game because everyone got some good minutes, so it was nice to see all 10 players contributing and pushing hard. We came out on top and it was a great last pool game building up to our final against the States,” said Team Canada player Kady Dandeneau (Pender Island, B.C.).

The Canadian men were equally happy with their win on Sunday.

“It’s nice to come out today and have a solid performance against Argentina; they’re a very good team so we played great together and executed the game plan that Matteo gave to us,” said Canadian player Bo Hedges (Wonowon, B.C.). “Getting first in our pool was what we wanted to accomplish through the round robin and now we go into a quarter-final match against Colombia. Playing against the host country should be a lot of fun with the energy from the crowd and we’re looking forward to that.”

It was another solid performance for the Canadian men as they captured an early lead against Argentina. They were able to dictate the pace of the game to push to a 10-point lead by halftime. In the second half the Canadians increased the pace to double their output and kept Argentina from threatening their lead.