Two members of the preliminary women’s national team roster have taken part in an introduction of royal proportions, meeting His Royal Highness Prince Charles on his recent tour of Canada.

Tracey Ferguson, veteran player with the Canadian Women’s National Wheelchair Basketball Team, was among four Paralympic athletes who met Prince Charles on May 22, 2012 for a tour of the 2015 Pan/Parapan American Games Athletes’ Village in Toronto, ON.

Ferguson, a three-time Paralympic gold medallist, has played on the National Team since 1991. She is set to compete at her sixth Paralympic Games this summer in London, England. 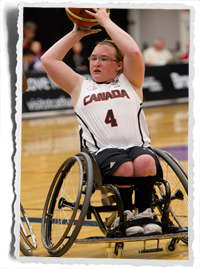 The following day, Ashley Baerg was one of six recipients of a Diamond Jubilee medal. Baerg’s commemorative award was issued in Regina, SK by Prince Charles as part of the Duke of Cornwall’s final leg of his visit to Canada. The 22-year-old is one of 60,000 deserving Canadians who will be awarded a medal throughout the year, marking the 60th anniversary of Her Majesty Queen Elizabeth II’s accession to the Throne as Queen of Canada. The medals are awarded for service to community and country.

Baerg first earned a spot on Team Canada with the Women’s U25 National Team in 2011 and competed at the inaugural Women’s U25 World Wheelchair Basketball Championships. She recently led a young Saskatchewan team to a 5th-place finish at the 2012 CWBL Women’s National Championships.