(LONDON) The combination of Canada’s passing game and scoring depth proved insurmountable for the Polish Men’s Wheelchair Basketball Team who fell to the Canadians 83-65 at North Greenwich Arena Saturday. With the win, Canada secures a berth into the quarterfinals, with two preliminary round games remaining. They face Germany on Sunday at 3:15pm BST to decide which team will control Pool B.

“There are some good teams in the other pool and we want to make sure we play the fourth seeds. We don’t want to make the next round more difficult than necessary. We’ve got to play better, too. We gave up a lot of points tonight. We’ve got to shore that up,” said Anderson.

Once again, Anderson was in a league of his own potting, 34 points, 12 assists, and 9 rebounds – all game highs. Richard Peter, of Vancouver, BC produced his best game to date adding 12 points, while Wonowon, BC’s Bo Hedges scored 9, and both David Eng, of Montreal, QC, and Toronto, Ontario’s Adam Lancia contributed eight.

Canada’s ball moving ability was on display from the onset. They capitalized on a 12-point run in the first quarter to establish a 12-2 lead, but a resilient Polish squad fought back to end the quarter 18-16 in their favour. By midway through the second quarter, Poland extended the lead to 5 points (28-23), before Canada’s top guns took over. They outscored their opponent 16-7 in the final minutes of the half and carried a 39-35 lead into the break.

With plenty of secondary scoring and a display of good all-around team chemistry, Canada took over in the second half and never looked back. Heading into the fourth quarter, they held a comfortable 57-47 lead.

Overall, Canada accumulated 27 assists – setting a new team record as the highest total on record since 2000. Of those, Anderson had 12 assists, which also sets the record for most individual assists in a game since 2000.

“We’ve got to go for the easiest game possible and the only way we can affect that is to end up first in the group, so there will be no letting up – you are still going to see good old Team Canada basketball tomorrow,” said Men’s Team Canada Head Coach Jerry Tonello.

Yes, we have booked ourselves a place in the quarterfinals, but it is almost like a tournament within a tournament. You want to finish top two in the pool to play the lower two. But you know there is good quality across all four spots in the other pool so that’s not a guarantee of an easier game,” said Tonello.

The Canadian Men continue preliminary round action on Sunday September 2nd at 3:15pm BST, facing-off against Germany at the Basketball Arena to decide who will remain the only undefeated team in Pool B. 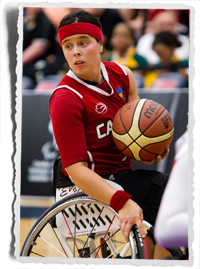 Capitalizing on the strength of their defence, the Canadian Women’s Wheelchair Basketball Team stormed out of the gates against Australia Saturday evening, and hung on to win 57 – 50. An eight-point run in the first quarter gave the Canucks a 14-6 lead heading into the second frame. By halftime, the Aussies had narrowed the gap to a single point (33-32), and the game remained close until the final minutes.

Janet McLachlan, of Vancouver, BC sealed the victory for Canada, following up back-to-back free throws with a clutch field goal that effectively put the game out of reach for Australia. She finished with a game-high 28 points and 21 rebounds.

“We have not doubted ourselves, but when you have not had that win under your belt, it is always there. It is in the background and it is nice to get it out of the way,” said McLachlan.

For the second consecutive night, McLachlan set a personal best for points in a single game. Her 28 points were two better than the 26 she scored in Canada’s first game (a 70-59 loss to the Netherlands). Both totals are more than any other Canadian since Australia hosted the Paralympics in 2000. She also established new Canadian benchmarks by making good on Canada’s first 20/20 performance, and most free throws in a single game since 2000.

“She is a great player and tonight she had a good night. She really came through at crunch time. She is cool under pressure,” said Canadian Head Coach Bill Johnson.