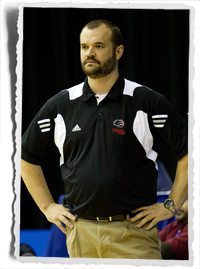 The Peter Williamson Memorial Award honours coaches who work with high performance athletes that compete at the national or international level.

“It is an honour to receive this award, especially considering the quality of coaches nominated,” said Johnson. “I think this award is a statement to the progress and growth of our program more so than an acknowledgment of any individual achievements, and that makes me especially proud. Lastly, I think this award is also a reflection of the increasingly high profile of sport for people with disabilities in Manitoba.”

The Coaching Manitoba Excellence Awards, presented by Manitoba Lotteries, aim to recognize and celebrate the outstanding achievements and significant contributions coaches have made over the years to their athletes and their sport through coaching.

A native of Winnipeg, MB, Johnson took over head coaching duties for the Canadian women’s team in 2009. He led the team to a bronze medal at the 2010 World Championships and a silver medal at the 2011 Parapan American Games. He will also be at the helm as Canada pushes for the podium at the 2012 Paralympic Summer Games in London, England.

Sport Manitoba is a not for profit organization and the lead planning, programming and funding agency for the development of amateur sport in Manitoba. Located in the Sport for Life Centre, Sport Manitoba partners with over 100 organizations to deliver sport in our province and is responsible for programs including the Power Smart Manitoba Games, Coaching Manitoba, Team Manitoba, Manitoba Sports Hall of Fame & Museum, and KidSport. Services provided include the Sport Medicine Centre, Sport Performance Centre, and Sport Resource Centre.