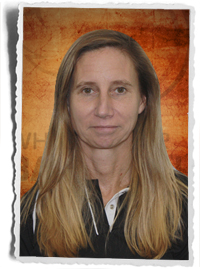 The Canadian Association for the Advancement of Women and Sport and Physical Activity (CAAWS) announced today the twenty women, including Gittens, selected to the Most Influential Women in Sport and Physical Activity list (MIW) for 2011. The objective of the list is to focus on women who are leaders and role models making a difference on the Canadian or international scene. The women on the MIW are influential women who contributed in a significant way to sport and physical activity in the year 2011.

“Wendy has always been a remarkable leader who stresses the importance of gender equity as she guides the development of our relatively young sport. She is certainly a tremendous champion for women’s involvement in wheelchair basketball as evidenced by her strong dedication to increasing opportunity and growth in the women’s game across the country” said Steve Bach, Wheelchair Basketball Canada President.

“Through her skillful efforts the organization was able to realize our vision of bringing the inaugural Women’s Under 25 World Championships to Canada, and it is with a great deal of excitement that we continue to prepare to host the 2014 Senior Women’s World Championships.”

“CAAWS publishes its Most Influential Women list to celebrate and honour Canadian women who are influencing change in their area of expertise of sport and physical activity,” said CAAWS Executive Director Karin Lofstrom (Ottawa, Ontario). “These leaders share a passion for sport and physical activity—and use it to improve the lives of others. These women are game changers who motivate others to become leaders.” 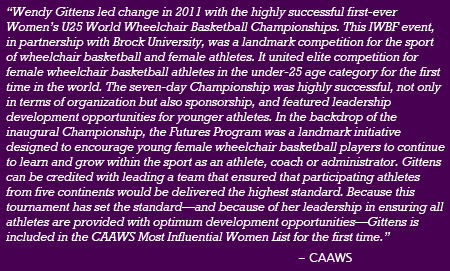 Every year, the MIW list includes athletes, officials, coaches, politicians, professors, administrators and volunteers. There are some women who have been named to the list several times, such as Paralympian and coach Chantal Petitclerc; and some who are new to the list like Olympic boxing hopeful Mary Spencer, and Karen Rackel who is the first ever women President of the Royal Canadian Golf Association (in its 116 year old history). Nine of the women are making their first appearance on the MIW List, while Olympian Beckie Scott and Paralympian Chantal Petitclerc have each been named to the MIW list 6 times, and Olympian Charmaine Crooks has appeared a record seven times.

CAAWS also nominates emerging leaders as Ones to Watch. The two outstanding women selected for 2011 are: Andrea Carey, Director of Operations & Community Engagement, Pacific Institute for Sport Excellence (Victoria, British Columbia); and Alexandra Orlando, Marketing Associate, Toronto 2015 Pan/Parapan American Games Organizing Committee (Toronto, Ontario). We look forward to following their careers in sport and physical activity. Boxer Mary Spencer was on the Ones to Watch list for 2010 and this year moved up to the MIW list.

The final list was compiled by a CAAWS selection panel, from both public nominations and from contributions from knowledgeable sport and physical activity leaders. The panel reviewed the submissions and based its decision on accomplishment and scope of activities in the 2011 calendar year. This is the 11th year that CAAWS announces its MIW list. Past lists can be found at www.caaws.ca