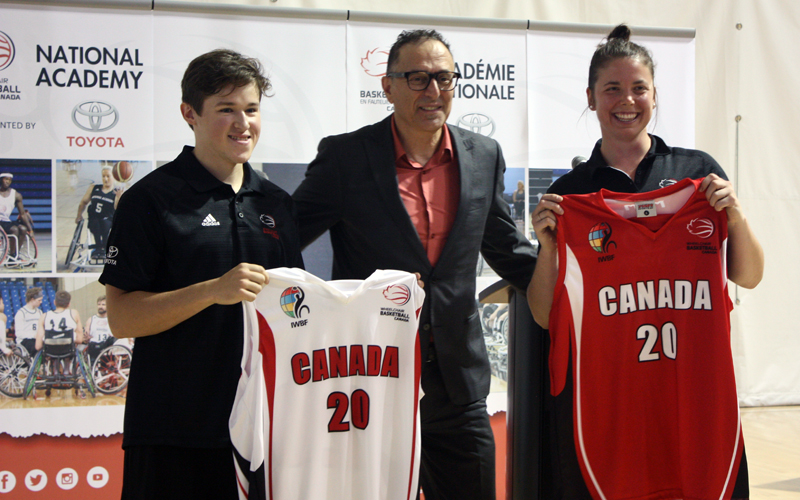 (Toronto, Ont.) The future is now for a promising group of Team Canada hopefuls and Wheelchair Basketball Canada is proud to welcome partner Toyota Canada into the fold with the official start of the 2017-18 training season at the National Academy in Toronto.

The National Academy, presented by Toyota, is a groundbreaking program designed to accelerate the development of the next generation of elite Canadian wheelchair basketball athletes and fuel Canada’s ongoing podium success at future World Championships and Paralympic Games.

The program brings together targeted wheelchair basketball athletes with National Team potential from across Canada and allows them to develop in a central location with access to optimized training, coaching, mentorship and support services. The program is led by National Academy Director and Head Coach Mike Frogley, one of the top minds in the sport.

“These talented athletes are the future generation of Canada’s Paralympic and world champions,” said Wheelchair Basketball Canada Executive Director Wendy Gittens. “Canada has an extensive legacy of podium success over the past two decades and the National Academy program is absolutely vital to strengthening the athlete development pathway and ensuring that success is sustainable over the next 20 years and beyond. We’re thrilled to launch into another season of training with a new presenting partner in Toyota Canada and look forward to seeing the progress that these athletes make in their development.”

“Toyota Canada is proud to start our partnership with Wheelchair Basketball Canada with support for a training program that will be essential for our next generation of elite athletes,” said Cyril Dimitris, Vice President of Sales and Marketing, Toyota Canada. “We know that, with programs like the National Academy, our country will continue to be a world leader in this sport.”

“We commend Toyota and the government and sport partners who share our vision of being a world leader and investing in the future of our sport in Canada while championing a more inclusive society in which everyone can participate and thrive,” said Gittens.

“The Academy program has made a world of difference in my development as an athlete both on and off the court,” said Ben Moronchuk. “I’m grateful for all of the support from the program partners because it provides me with an opportunity to train alongside the top young athletes in Canada and really take my game to the next level and access world-class resources along the way. All of that will really help me in my pursuit of reaching the podium for Team Canada.”

The National Academy is a program within the Wheelchair Basketball Canada National Training Centre located at the Toronto Pan Am Sports Centre in Scarborough.