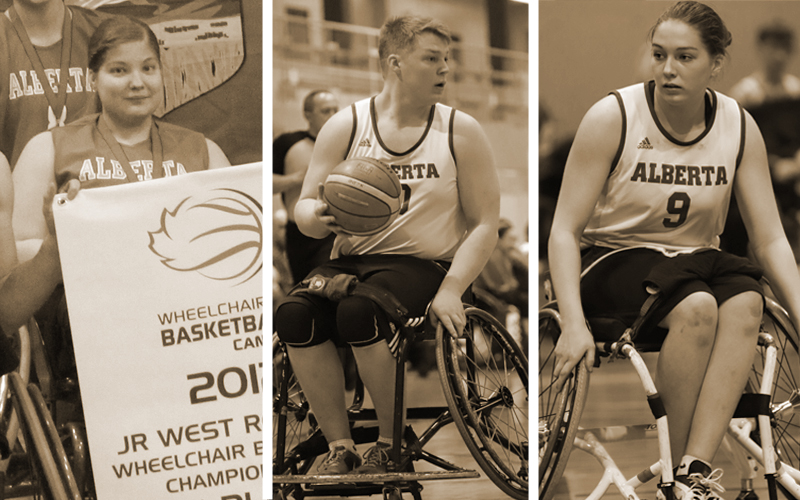 (Red Deer, Alta.) Siblings Mackenzie, Bradon and Jayna Doll share an everlasting bond not only through blood, but also through the sport of wheelchair basketball. The sport brought them closer together as kids and will soon unite them once more in their home province of Alberta at the 2019 Canada Games in Red Deer.

Their wheelchair basketball journey began when Mackenzie, who has spina bifida, discovered the sport after a brochure at her rehab hospital in Edmonton prompted her to drop in at a local practice. After getting a taste of the game, she joined a mini program for the upcoming basketball season when she was 12 years old.

Younger siblings Bradon and Jayna would tag along to Mackenzie’s wheelchair basketball practices and soon found themselves wanting to get into the game alongside their big sister. While Bradon and Jayna initially got involved in support of Mackenzie, both fell in love with the game in their own way.

“The family and just the joy of playing the sport,” said Jayna of her appreciation for wheelchair basketball. “It’s so fun and it’s so neat to be able to play with people like myself and then people like my sister and people of all sorts of different disabilities. You just learn so much. I think that’s pretty awesome.”

“In wheelchair basketball it’s such a tight-knit community that you’re really playing for one another as much as you’re playing for yourself,” said Bradon. “That really keeps me going out, going through the grind and through those tougher practices. It’s the positive attribute that I focus on to keep going.” 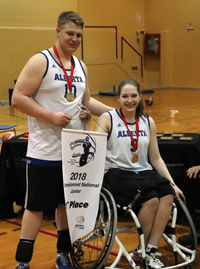 The siblings grew to appreciate the opportunity to compete and grow together as a family both on and off of the basketball court.

“Like any teammate, when your teammates find success you’re really happy for them and you celebrate those successes,” said Bradon. “But when it’s a teammate and a family member, it just fills you with joy when they get something right or when they make a good play, and there’s a lot more care in their development too.”

Based in Camrose, the Doll siblings have spent plenty of quality time together on the hour-long commutes each way to get to and from basketball practice.

“I think going beyond just the playing and the practice, the time we get to spend together has really made us closer, I think, as a family,” said Jayna. “We can relate more to each other because we have ties (through wheelchair basketball).

For Mackenzie, the ability to play with her younger brother and sister was also an opportunity for them to gain a better understanding of life from her vantage point.

“It was really nice that wheelchair basketball is inclusive because Bradon and Jayna can see, not necessarily what it is for me to be disabled on a day-to-day basis because they’re not transferring in and out of the wheelchair or in and out of the car without the use of their legs, but they do know how hard it is to push for 40 minutes in a game at full speed, or shooting and stuff like that,” said Mackenzie.

The inclusiveness of the game is not something that everyone is aware of.

“I think it’s very important because whenever I talk to people and I’m like ‘Oh yeah, I play wheelchair basketball’, I always get strange looks like ‘but you’re not in a wheelchair’. It’s seems wrong in my head that we’re not allowed to play this sport. Anyone can do anything,” said Jayna.

“I think people need their eyes to be opened. They need to be able to see that this is for everyone. Sport is an inclusive activity and it’s a community.”

Mackenzie, now 24, found that sense of community and learned how to become independent through wheelchair basketball. She went on to play for Canada at the Youth Parapan American Games in 2013 in Buenos Aires, Argentina. While she no longer actively plays the sport, she does keep tabs on her younger siblings’ progress.

The next stage of the journey for the Doll family unfolds two hours up the road from home at the 2019 Canada Games in Red Deer. Bradon, 21, will compete at his third and last Canada Games, while Jayna, now 16, is eagerly awaiting her Games debut after she just missed the cut four years ago.

“It’s such an experience,” said Bradon. “Being an athlete with previous Canada Games experience, some of the biggest memories are just the atmosphere and the feeling. You can literally feel it in the air how there is so much vibe going on around you and that feeling really sticks with you and it really makes you want to come back.”

“It’s just all nerves of excitement and waiting to go onto that court for the first time and actually be a part of something bigger than myself, I think is probably the coolest thing about it,” said Jayna.

Much of the Doll family, including relatives from the Netherlands, will descend on Red Deer to take in all of the action at Canada Games as Bradon and Jayna compete for Alberta. Mackenzie, who is volunteering at the Games, is excited for her younger siblings and can’t wait to see them play in person on the big stage as they continue to grow through the sport.

“For me to watch them progress from minis to where they are now with Team Alberta is pretty amazing,” said Mackenzie.

“To be able to be there with them and watch them play in these Games both together as brother and sister is amazing. It’s something that I could never have thought possible until wheelchair basketball was introduced into my life.”

You can follow the Dolls and the rest of the action from Canada Games as the wheelchair basketball competition kicks off from February 17-21, 2019 in Red Deer.

Watch wheelchair basketball live on the Canada Games webcast portal at CanadaGames.live/wheelchair-basketball. Follow all of the action on social media with the hashtag #CGwheelchairbball.

Visit wheelchairbasketball.ca for the schedule and results from wheelchair basketball at the 2019 Canada Game.