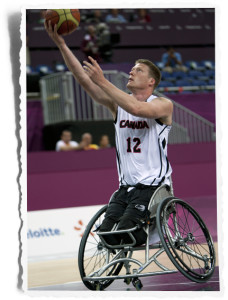 Anderson was a key fixture on the Canadian Senior Men’s National Team between 1998 and 2012, helping Canada win back-to-back Paralympic gold medals in 2000 and 2004. Following a silver medal at the 2008 Paralympics, Anderson played a key role for Canada at the London 2012 Paralympics leading the team to its third gold medal in the last four Games.

Largely considered to be the best wheelchair basketball player to have ever played the game, Anderson’s tremendous work ethic and commitment to excellence has earned him countless team and individual accolades. A full list of his accomplishments can be found online at: https://www.wheelchairbasketball.ca/players/patrick-anderson/.

In addition to Anderson, Jane Kirby, a member of Canada’s National Senior Women’s rugby team, and Jamie McGinn, a winger for the Colorado Avalanche, were also inducted into the Central Wellington Sport Hall of Fame at the June 20th ceremony.