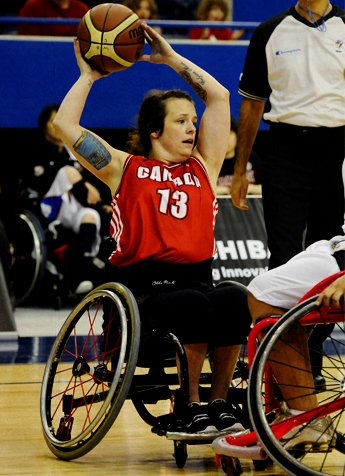 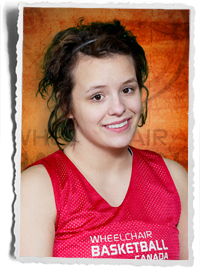 Jamey Jewells was first introduced to wheelchair basketball by an occupational therapist in 2007. A competitive and determined athlete, she took to the sport and her passion for the game continues to flourish to this day.

Jewells loves the fast-paced, aggressive, and hard-hitting style of play of wheelchair basketball. A strong team player, she works hard both on and off the court to develop her skills and her reputation as a threat on both sides of the ball.

Earlier in her career, she split playing time between both the Nova Scotia Flying Wheels and Nova Scotia’s Provincial Junior Team, and she helped lead her province to a fifth place finish at the 2011 Canada Games, marking Nova Scotia’s best-ever performance at the competition.

In the 2011 season she took her game overseas to join the Trier Dolphins, a semi-professional club team based in Germany. She has since joined Wheelchair Basketball Canada’s National Academy in Scarborough, Ont.

Jewells believes representing Canada at any level is a very satisfying experience. While the opportunity to play for the Senior Women’s National Team is a personal honour, she knows her family and friends are also proud of her accomplishments.

Jewells made her National Team debut at the 2011 Osaka Cup and captured a bronze medal. She also represented Canada at the first-ever Women’s U25 World Championshipsin St. Catharines, Ont., where she was named a tournament all-star. In 2012, she competed at her first Paralympic Games in London, England. She won a world championship title with Team Canada on home soil in Toronto in 2014.

Jewells says she pushes herself to new levels each and every day, living by a motto her father told her when she began playing wheelchair basketball – “When someone gives you limits, you go past them.”